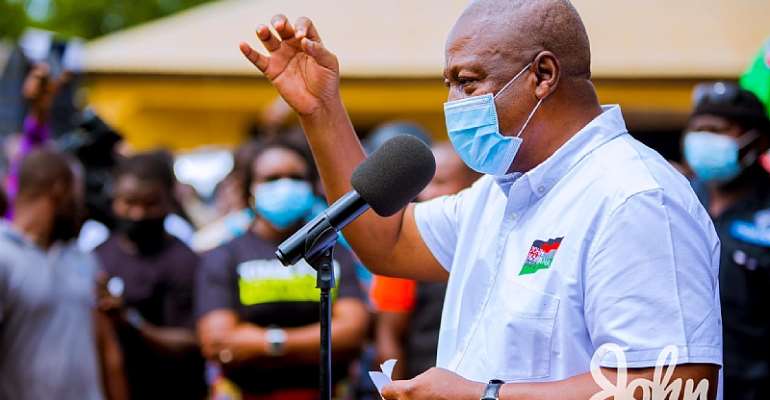 Former president and flag bearer of the main opposition National Democratic Congress has promised to radically eliminate the double- track system of education introduced by the NPP government as part of the Free Senior High School policy they are struggling to implement properly.

Addressing a dubar of chiefs and supporters in his ongoing Central Regional campaign tour, Mr. Mahama bemoaned the fatigue on students and teachers due to the nuisance double track system, and assured parents, teachers and students of his pledge to tackle it head on if voted for to become president.

The double,track system was introduced to ease the burden that was unleashed on our secondary education system due to the poorly implemented free SHS by the Akufo Addo led New Patriotic Party government.

It is a widely accepted fact that the lack of adequate infrastructure to contain the increased enrollment is the main reason for double-track system. It is, however, causing more burden on parents and students as the tracks have cut down contact hours while parents are spending more to arrange private studies for their wards to prevent them from becoming deviants in society as they spend more time at home.

The NDC through the People's Manifesto has promised to make Free Senior High School Programme better by ensuring that its numerous challenges are addressed, and higher standards introduced.

On the double-track system, the manifesto has promised to expand the Free SHS programme to cover students in the private Senior High Schools in underserved/deprived areas, complete all abandoned structures for secondary and technical education including abandoned E-Blocks to cater for current students and expected increase in admissions as short term measures that will see to the end of the cancerous double-track system.

The manifesto has also proposed the construction of at least one Senior High School in districts without Senior High Schools as a medium term measure to completely see an end to double-track system. This is aimed at ensuring that all students remain in school simultaneously and receive adequate tuition hours. Parents will, therefore, not have to spend extra to keep their wards active in learning as is happening in the current situation.

More Article
Modern Ghana Links
Jean Mensa Forgot; She Could Have Aborted The 2 Kids. She Might Have Had With Government!
Once Sacked Twice Learnt; Amidu – Cynthia Reunion Ends With Her As Interim Special Prosecutor
Chemical Science And Chemical Technology Can Play A Major Role In Developing A New India — Says Padma Vibhushan Prof M M Sharma
The Kenyan film director taking on the world -- with positive stories of black life
Pasha 88: Lockdown and young people living on the streets of Harare, Zimbabwe
Trump's legacy in Africa and what to expect from Biden
As cobalt demand booms, companies must do more to protect Congolese miners
How values, interests and power must shape South Africa's foreign policy
New report ranks how friendly – or not – African governments are towards girls
Dossiers Quotes Coronavirus
TOP STORIES

Kufuor Speaks Ahead Of December 7
11 minutes ago