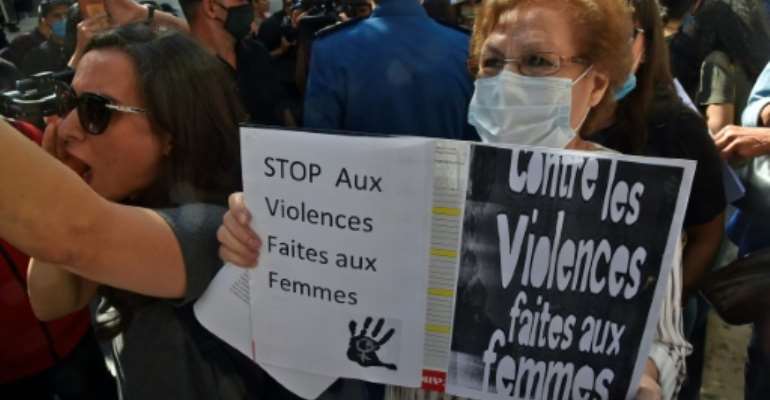 People rally in the capital Algiers on October 8 to denounce the brutal killing of a 19-year-old and dozens of other women in the North African country this year. By RYAD KRAMDI (AFP/File)

Algerian actresses angered by murders and violence targeting women have launched a campaign to fight the phenomenon -- but not everyone has welcomed their initiative.

After the gruesome rape, torture and murder of a 19-year-old woman sparked angry demonstrations earlier this month and calls for a return to capital punishment, 22 actresses published a photo of themselves dressed in black.

"We, Algerian actresses, unite today to say enough to violence and killings of women. We are calling for more awareness and a general mobilisation to stop this violence," said a statement by the women, many of them household names in Algeria.

The North African country, like its neighbours Tunisia and Morocco, does not publish official nationwide figures on murders of women.

But campaign group Femicides Algeria recorded 75 such killings in 2019, with a further 41 so far this year.

The group says the actual figure is much higher.

And while the government last year registered some 7,000 complaints of violence against women, activists say it has done little in response -- prompting the actresses to launch their own initiative.

"This campaign is aimed at everyone, men and women. It's not to accuse Algerian men but to make everyone responsible," said Salima Abada, a popular actress in the North African country who is among those involved.

She said it was already having an impact.

"There's debate, anger, people are fed up -- but it's already a beginning," she said.

'No excuses for rapists!'

But a video of one of the actresses has already triggered a bitter backlash on social media.

Algerian women walk past the main post office in Algiers on August 12, 2020. One well-known TV presenter has criticised a culture of street harassment against women in the North African country. By RYAD KRAMDI (AFP/File)

Mounia Benfeghoul published a video on Instagram early this month following the news of the grim killing of the 19-year-old, identified as Chaima.

In an angry monologue, Benfeghoul slammed people who had made excuses for the killer: "There are no excuses for rapists! It was a rape! She didn't consent!"

Well-known as a TV presenter, Benfeghoul said she was against the death penalty -- but favoured castrating sex offenders.

She also criticised a culture of street harassment and called for children to be provided with "a good example".

Her outburst set loose a wave of insults on social media, with men mocking her dress, calling her a "whore" and one man publishing a video in which he threatened her with physical violence.

Those reactions were simply "because she's a woman", said Abdellah Benadouda, founder of the US-based Radio Corona Internationale.

"She said nothing new. She confirmed what we already know: that taboos in Algerian society are at the source of the silence around rape, incest and paedophilia," he wrote on Facebook.