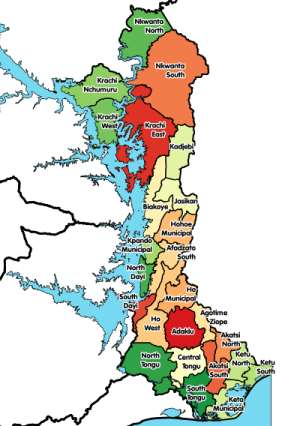 It is becoming one too many the treasonable agenda by the Ewe secessionists. These former Western Togoland natives are resolutely determined to cause ethnic violence, divisions and the ultimate disintegration of Ghana, a peaceful unitary nation in West Africa. Whether their action that has lately been exponentially intensified is to cow Ghanaians to yield in to the selfish, devilish and diabolic desires by the NDC political party or not, the NPP government and all discerning Ghanaians must unite to condemn and fight the opportunistic secessionists.

The intensification of their action is no doubt to give credence to the irresponsible machismo utterances by the leadership of the National Democratic Congress (NDC), if not a diversionary tactic to disengage the NPP from focusing on winning the impending 7 December 2020 elections to do much better things for Ghana. The NDC as a political party has resolutely decided to wreak havoc on Ghanaians should they not win the upcoming election 2020, hence have themselves initiated, and are executing, their own diabolic agenda not different from the unbecoming attitude by the secessionists.

Unwilling to hurriedly whip up any tribal sentiments, or be an ethnocentric, I decided to do a further research to confirm the veracity of the information forwarded to me on my WhatsApp wall by my brother-in-law on the illegality and falsities of the treacherous actions engineered by the Ewe secessionists in question. From my search on the internet, although the Ewes in then Trans-Volta Togoland, thus Western Togoland, voted in their majority in preference of amalgamation with French Togoland or separation from Gold Coast to continue with the UN Trusteeship. However, the majority of the overall count of votes cast by the entire ethnic groups or districts forming the Western Togoland favoured integration with Gold Coast, then on its way to becoming an independent country, Ghana.

The Western Togoland comprised a number of districts of different ethnicities. They were the Mamprusi, Dagomba, Gonja, Buem/Krachi, Kpandu and Ho. Why then is it that only the Ewes, thus the latter three or two on the list, the supposedly intelligent ones among the lot, have started agitating for self-rule or integration with independent Togo, formerly French Togoland? The first three on the list, thus the Mamprusi, Dagomba and Gonja, have neither publicly nor privately identified with the secessionist criminal agenda initiated by the others.

During the plebiscite to either join Ghana or French Togoland or remain with the United Nations Trusteeship, the voting results went as follows:

The government must not deal leniently with this treasonable activity by a few opportunists among the Ewes trying to cause the disintegration of Ghana for their myopic political cause.

I quite remember, if my memory serves me right, that under the military leadership of Colonel I. K. Acheampong, he moved troops to the Volta region and threatened to wage war against Togo should they dare cause any secessionist activities in that part of Ghana. The Togolese were making claims over that part of Ghana. Acheampong’s quick move put a stop to that move made by Togo or their partners in the Volta region. Although the Akufo-Addo government is a Civilian government without that forceful power unlike a military regime, once a government, you have constitutional power and mandate to command the nation’s troops to quell any secessionist activity against your country.

The longer the government waits to deal a dizzy blow to the head of the nation-disintegration cause by the Ewe secessionists, the more dangerous the situation is allowed to fester to finally get out of control.

The NDC with their agents and assigns must be ashamed of themselves for claiming all these years that all Ewes are Ghanaians so they must be allowed to register and vote in Ghana general elections. All along, discerning Ghanaians including Rockson Adofo, the proud and the no-nonsense fearless son of Kumawu/Asiampa, the voice of the voiceless and the author of this publication, have been saying it is not any Ewe that is a Ghanaian, following the internationally-recognised demarcations of lands into sovereign states.

Now, those of us who have been upholding that belief are vindicated by a statement made by Samuel Okudzeto Ablakwa, Member of Parliament for Tongu Constituency in the Volta region, himself an Ewe. He says and I quote, “It is very worrying. That is why some of us insist there should be a high scale investigation into this matter. I have watched some of the videos. The war songs, chanting, and all of that. It is clear that it is not the Ewe associated with Ghanaians. It sounds more like the Ewe of the Togo people. The borders are closed, how did they get in?”

However, it was this same Samuel Okudzeto Ablakwa who not long ago, during the May 2020 nationwide voter registration of eligible Ghanaians onto the electoral roll was insisting the closure of Ghana borders was to deprive Ewes from registering because some live on the borders and keep going to and from Togo on daily basis to do business; purporting all Ewes are equally Ghanaians. Now that he risks being kicked out of Ghana parliament should the cause of his Ewe secessionists-colleagues succeed, he has come out telling the truth that not every Ewe is a Ghanaian.

To conclude, the Ghana government must not dither in its resolve to employ any ruthless but legal means as possible to put an end to this treasonable cause in pursuit by the secessionist's Ewes.