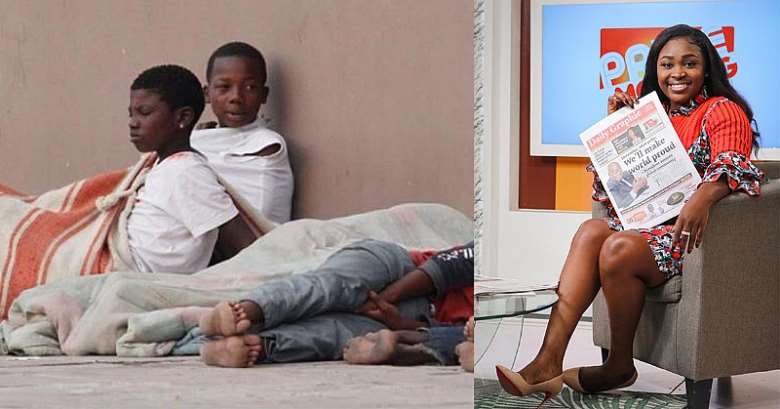 Street children loitering around the Opeibia-Airport stretch have cried out to politicians and philanthropists to provide them something more meaningful than just food.

Speaking in a documentary on street children by Joy Prime's Prime Morning, Abigail, a street child who grew within the Opeibia Legion village slum laid plain the plight of the children in the slum.

According to her, the hot meals and temporary things donated to them are inadequate in relieving them of their predicaments.

Referring specifically to an initiative of the incumbent Member of Parliament; Honourable Lydia Seyram Alhassan, she spoke on behalf of all the street children who shyed away from the cameras.

“Food is not enough! How long can you feed us? You can’t. The one pack, one pack, is not what we need. We desire decent places to put our heads, hope for the future, jobs to help us earn meaningful incomes and protection from abuse”.

Street children along the Opeibia Legion village have grown increasingly in number. The documentary by Prime Morning's social watch segment revealed that a dozen of the children ended up on the street through broken homes, poverty and recalcitrancy.

The street is however not the safest place for these children. Not only have they been exposed to drugs and substance abuse, but majority of them have resorted to petty thievery and even rape.

The documentary revealed that potentially, the menace of streetism in the porch vicinity of the Silver star towers and Stanbic Heights is detrimental to the tourism industry and safety of residents in the area.

The children who refused to speak on camera cried out to politicians and stakeholders to come to their aid with lasting solutions and not food.

The Prime Morning Social watch team is committed to following up with the incumbent Member of Parliament; Honorable Lydia Seyram Alhassan and the NDC Parliamentary candidate John Dumelo and other stakeholders involved to speak to the issue and collectively find lasting solutions to end the menace.

Covid-19: Headache, body pains show the vaccine is working i...
26 minutes ago