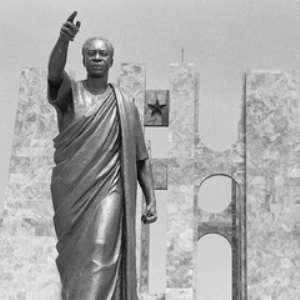 As we continue to idolize Nkrumah and refresh our memories of him, may we also reflect on his flaws and fate? Not discussing only his success and contributions to mother Ghana, would help those in power, those who have authority and potential future leaders to reflect on this line, "power corrupts and absolute power corrupts absolutely ". Not necessarily talking about political power and/or political authority. There are blocks of power and authority in our society, both formal and informal, political and apolitical, traditional and non-traditional, religious and secular.

Dr. Kwame Nkrumah’s greatness and achievement is almost on every media outlet as far as space could allow it, especially, today, as his country remembers and celebrates his birthday, so there is no need to repeat them. As human, Dr. Nkrumah, the “osagyefo” had his flaws, especially as a leader, whose advisors were equally fallible. Have the “perceived” things that brought Nkrumah down ceased to be characteristics of people in power and of people who have authority today in our society? Maybe, we refuse to discuss them, whenever we have the opportunity to do so.

Nkumah's fate and flaws has repeatedly been seen in all presidents and head of states, who came after him, even including the sitting president. One of the reasons may be due to the fact that we brush those issues aside, whenever we discuss Nkrumah. It is however, refreshing to note that the sitting president evaluates Dr. Nkrumah’s leadership style objectively and therefore draws some moral lessons from the African icon’s leadership style. At least, in the book, "Things Fall Apart", flaws in great Okonkwokwo was that he failed to recognize that the time has changed, and he couldn't afford to uphold so fanatically the very things that held his clan together in the past. The white man had put a knife into those things already. We all can learn from Okonkwokwo and of course, of Nkrumah's flaws. The powerful nations and world bodies, who used to disrespect China in the past are the very first that invite China to the highest table at the feast. Time has changed and unlike, Okonkwokwo, they have learnt some lessons. Nkrumah's coin has 2-sides like any great leader, so let's learn from both sides.

Stop tarnishing my image, I have never been deported from US...
8 minutes ago

The boo is the truest voice of the people; not the selfish c...
18 minutes ago