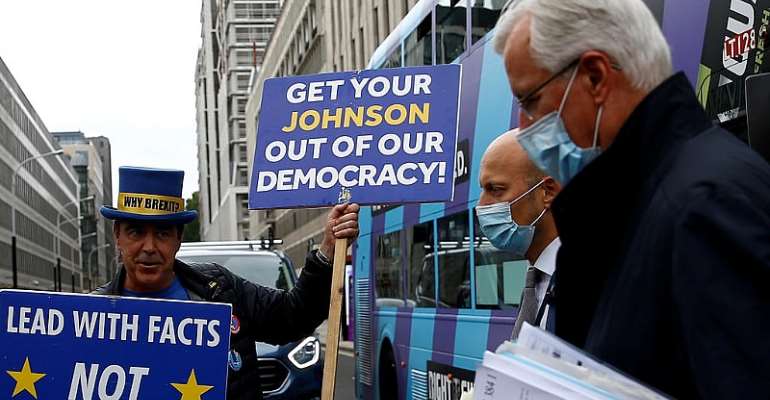 France has told Britain that it would be unacceptable to violate the terms of the Brexit Withdrawal Agreement, which British officials have admitted breaks international law. The European Union has threatened legal action unless the UK backs down on its plans to rewrite the divorce deal.

"Unacceptable," was the term used by French Foreign Minister Jean-Yves Le Drian to describe Britain's plans to tear up parts of the Brexit Withdrawal Agreement.

Le Drian made the comments on the sidelines of a meeting on Iran with his British counterpart Dominic Raab, during a routine visit to London on Thursday, according to a statement from the French Foreign Ministry.

The intervention shows the risk of the dispute over Brexit bleeding into other areas of UK diplomacy.

It came after the UK government tabled legislation to alter key elements of the Withdrawal Agreement that Prime Minister Boris Johnson signed with Brussels earlier this year.

The move has whipped up a storm of anger both at home and from the EU.

Ultimatum deadlock
During emergency talks Thursday, European Commission vice president Maros Sefcovic warned that unless the new British measures are withdrawn "by the end of the month", Brussels will consider taking legal action, saying the plans had "serious damaged trust".

Senior government minister Michael Gove rejected the EU call, saying that the UK "would not and could not" withdraw the relevant parts of the draft law as requested.

The draft Brexit bill at the centre of controversy would give British ministers unilateral powers to regulate trade among England, Scotland, Wales and Northern Ireland, once the force of EU law expires after a post-Brexit transition period at the end of this year.

But under the EU withdrawal treaty, Britain is meant to liaise with Brussels on arrangements for Northern Ireland, which will have the UK's only land border with the EU, and where 30 years of bloodshed were ended with a landmark peace deal in 1998.

Eyeing US trade
EU diplomats -- and Johnson's many critics at home including in the UK's devolved governments -- have ridiculed Downing Street's argument that the EU treaty was rushed through and contained unforeseen problems relating to Northern Ireland.

Critics reckon the new bill is aimed at torpedoing any future trading relationship with the EU after the transition period expires to allow Britain to forge ahead with other trade pacts, not least with the United States.

However, House of Representatives Speaker Pelosi gave short shrift to any British hopes of Congress ratifying a future trade deal if it ploughs ahead with the new Brexit bill, warning it to honour its obligations to Northern Ireland.

The House of Commons will have its first chance to vote on the bill on Monday, with further debates scheduled for September 15, 16, 21 and 22.