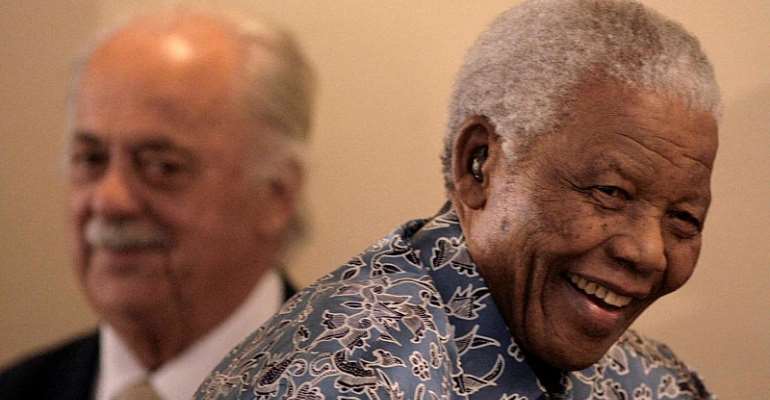 South Africa is in mourning following the death on Wednesday of renowned human rights lawyer George Bizos, who famously defended Nelson Mandela and other victims of racial segregation. President Cyril Ramaphosa has paid tribute to his 'immense' contribution to democracy.

"This is very sad for our country," Ramaphosa said.

"An incisive legal mind and architect of our Constitution, he contributed immensely to our democracy," he said in a tweet.

Bizos died on Wednesday of natural causes at the age of 92 peacefully at his home with his family, they said in a statement.

The celebrated lawyer represented Nelson Mandela and other leading activists on treason charges during the so-called Rivonia Trial in 1964, one of the most important political trials in South Africa's history.

Many had expected the death penalty.
Bizos is credited with shielding his client from execution by adding the words "if needs be" to Mandela's famous speech at the trial, in which he said he was prepared to die.

Long friendship
In his autobiography "Long Walk to Freedom" (1994), Mandela describes the advocate as a lifelong friend and "a man who combined a sympathetic nature with an incisive mind".

Bizos continued to represent Mandela throughout his 27-year jail term and also acted for his then wife, Winnie Madikizela-Mandela, on more than 20 occasions.

Bizos and Mandela met as law students at Johannesburg University in the 1950s and later worked together.

Admitted to the Johannesburg Bar in 1954, Bizos took on cases that challenged the apartheid system, attracting the ire of the government but establishing the track record that led to his joining the Rivonia Trial team.

Escaping the Nazis
Born in Greece in 1927, Bizos arrived in South Africa in 1941, having fled Nazi-Occupied Greece with his father, mayor of the Greek village Vasilitsi where he was born.

Aged 13 at the time, Bizos and his father had drifted on the Mediterranean for three days after helping seven New Zealand soldiers escape to Crete from the Greek mainland.

Penniless and with no English, they moved inland to Johannesburg and Bizos fell out of education for several years before being assisted by a teacher who took pity on him.

He went onto forge a long career dedicated to defending democratic values and human rights. The soft-spoken Bizos represented the country's best known political activists and practiced into his late eighties.

One of his last major trials secured government pay-outs in 2014 for families of 34 miners shot dead by police at Marikana, northwest of Johannesburg, two years earlier.

Bizos was married to Arethe “Rita” Daflos, who passed away in 2017. They had three sons.