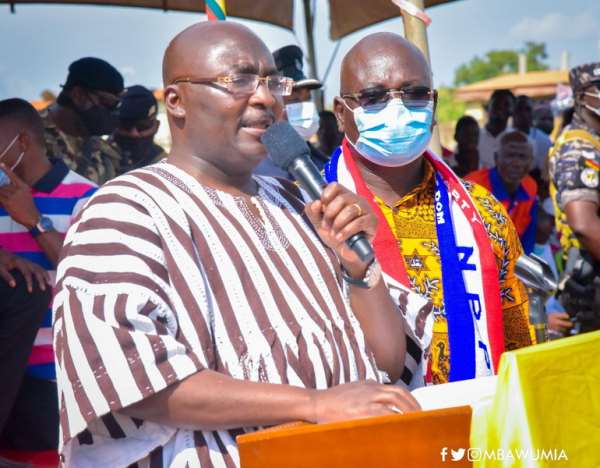 At a meeting with the Ghana Catholic Bishops’ Conference on Friday, 4 August 2020, President Nana Akufo-Addo complained that: “Archbishop, this name-calling seems to be a feature of Ghanaian public life but sometimes, when things come out, we would hope that you will comment on them”.

“The comment made by my opponent: ‘Akyem Sakawa people’, I have not heard any public figure, independent person, yourselves, comment on it.

“It is completely unacceptable”, Mr Akufo-Addo said, adding: “If I were to get up to make comments about Northerners or Gonjas, you can imagine the uproar that would be in the country”, he pointed out.

The President wondered how Mr Mahama, a presidential candidate and a former President of Ghana, “can call a group of Ghanaians ‘Sakawa people’”.

“And it involves the group from which the sitting President comes, and that statement goes without comment, and at the same time we hear all these statements, let all try and bring the politics of insults to an end,” the President said.

During his campaign tour of Gusehgu in the Northern Region, Dr Bawumia accused Mr Mahama of substituting his incompetence with tribalism in the lead-up to the 7 December 2020 polls.

“You cannot win this Presidency with tribalism. Ghana has gone beyond tribalism”, he condemned.

“We will not stand for tribalism and, so, we will continue to call on John Mahama to apologise unreservedly for what he has endorsed”, the Vice President said.

“This election is going to be fought on our record but not on tribalism.”

Meanwhile, Mr Mahama, in his response to the President told TV XYZ in an interview on Saturday, 5 August 2020 that the President is rather seeking to stir tribal tensions:

“OK, remember that on two occasions in the recent past, I had called for a debate with President Akufo-Addo. He’s not found it worthy to respond to that call”.

“I can understand President Akufo-Addo’s frustration, desperation and deliberate attempt to whip up ethnic sentiments in this particular case but I don’t think it will wash”, Mr Mahama said.

“I’ve advocated a campaign of issues and that is what I’m focusing on as I engage and interact with people on my tour of this country”, he noted.

According to the flagbearer of the NDC, President Akufo-Addo has no right to complain about the name-calling used to describe some of his “friends and family members” serving in his government and who are behind the “shady” and “untidy” Agyapa Royalties deal, since, in his view, the President set the precedence in the past.

“In any case”, Mr Mahama noted, “President Nana Akufo-Addo has lost the right to complain a long time ago”.

The former President explained: “He [President Akufo-Addo] was an opposition leader who called Presidents before him anything you can imagine, including ‘Prof Do Little’ and then he described somebody as a ‘Simpa Panyin’ and I don’t want to repeat the other things he said”.

Mr Mahama continued: “He’s the President who has called his critics naysayers and Jeremiahs”, adding: “I don’t understand on what standard he can be offended at this time because he has precedence of name-calling”.

“I’ll be the last person to disparage any tribe or ethnic group”, Mr Mahama said.

“In the first place, the National Chairman of my party, Mr Samuel Ofosu-Ampofo, NDC, is an Akyem and so are many leading members of my party and members and supporters and when I was President, I appointed many Akyems in my government”.

“The head of our Manifesto Drafting Committee, Prof Danso Barfuor, is an Akyem and they have all contributed to our government and our forward march to recapture power in the December elections in order that we can create jobs, spread development in an equitable manner throughout the country”, Mr Mahama pointed out.

He said: “Everybody knows me since I’ve been in politics and I’ll be the last to express any ethnic sentiments”.

Speaking about the President’s angry disposition with which he made the complaint to the Catholic Bishops, Mr Mahama said: “I think that temperament in leadership is very important and there are many things a president should attend to and you must not appear, in public, to have lost your cool”.

“He seemed very angry, that’s true, but I think he should maintain his temperament to come across as a good leader”, Mr Mahama advised.

Mr Mahama also denied that the Akyem Mafia and Sakawa Boys description was targeted at the President’s ethnic group.

“It is important for me to point out that no one has described his ethnic group or any other ethnic group in the manner in which the President mounts this complaint.

“What I remember is: I shared a post of one of our very fine and brilliant MPs for Bolgatanga Central, that is Hon, Isaac Adongo, and in that post, Adongo describes certain people in Akufo-Addo’s government, and you know he has a lot of members of his family and friends in his government, so, Isaac Adongo describes those behind a certain shady and untidy deal in the government in a particular manner”, Mr Mahama explained.