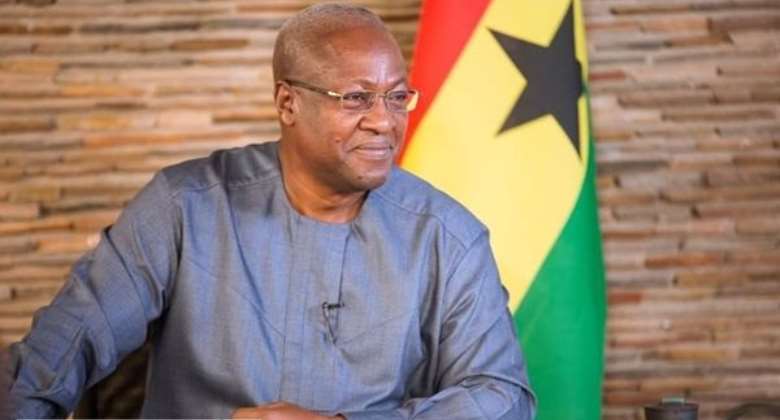 No matter the socio-cultural, or whatever differences some of us may have with the current Asantehene, Otumfuo Osei-Tutu II, he has some admirable character traits that even his detractors cannot honestly deny them: He is thoughtful, strategic, fearless, matured, well-informed story teller,historian who is far ahead of his game as a leader/king. To that extent, no one can go to the Manhyia Palace with some 'petty motives/stories' and come out successful, especially in the presence of the current occupant of the Golden Stool.

Former President Mahama should have known some of these traits about this Asantehene long before because several reports indicate Mr. Mahama has a very 'close relationship' with Otumfuo Osei-Tutu II. Hence, it is quite puzzling that in his recent visit to Manhyia Palace to introduce the NDC's vice presidential candidate, Prof. Naana Opoku-Agyemang, for the December 2020 general elections to the Asante King, ex-president was reported to have taken his politics of desperation, bitterness and self-pity all the way to the Manhyia Palace.

Among other self-pitying remarks or complaints that were marked by traces of pettiness and bitterness, Mr. JD Mahama was quoted as saying he did far more developmental projects for Ashanti Region as president than the present NPP administration led by Nana Akufo-Addo. In fact, during his running mate introduction tour at Manhyia Palace, Mr. Mahama shamelessly claimed all the projects he initiated in Ashanti Region during his presidency have been 'abandoned' by the current government, although Nana Akufo-Addo is still in power and vigorously pushing all the developmental projects that need to be pushed across the nation.

Implicitly, by his misleading comments, Mr. Mahama appears to be exposing his suppressed bitterness over his defeat by Nana Addo in 2016 at every least opportunity. In effects, the comments were also a subliminal attempt at reinforcing former President Mahama's long-held perception that majority of the people in Otumfuo's region are ungrateful in that with all the 'good things' he did for the Ashanti Region, yet the people massively voted against his then NDC ruling government in 2016, paving the way for Nana Addo's government to reap the toils of his (Mahama) labour, undeservingly.

Here, Mr. Mahama was not only engaging in his usual political mind games and over-dramatization of issues but also, it was clear thatsomehow he sincerely believes Ghanaians in general have 'memory loss' and so they are incapable of remembering any bad experience associated with his past misrule. As pointed out, Mr. Mahama probably harbours the view, albeit wrongly, that he knows Asantehene very well, but the contrary holds sway. Admittedly, the Asantehene is a human being but he always tries to be neutral in political issues.

According to multiple eyewitness accounts, the Asantehene graciously sat there for his NDC visitors, led the party's flagbearer to finish his official introduction of his running mate, including some of his usual incoherent and misleading critiques of Nana Akufo-Addo's relatively infant government. After patiently listening to ex-President Mahama's same old, same old aspersions directed at his successor (Nana Addo), and to some extent, to the 'ungrateful' people of Ashanti Region, it was Otumfuo's turn to talk.

As a well-informed leader and quintessential advisor, Nana Osei Tutu II did not mince words, but spoke candidly and advised presidential candidate JDM to have an honest self-introspection of his past presidency so as to come to terms with the rationale behind his defeat in 2016. All along, it was obvious Mr. Mahama was in complete denial or deliberately ignoring the rudiments of staging a comeback presidential campaign, thinking that Ghanaians would simply forget or overlook his past poor management of this country and vote for him to come back to power to run the nation aground once again.

It is quite interesting that while former President Mahama was introducing his running mate in the person of Naana Opoku-Agyeman, the Asantehene, on his part, also introduced some political realities into the campaign of Mr. Mahama. In layperson's terms, Otumfuo Osei-Tutu II objectively reminded Comrade JDM that “those who try to erase history are doomed to repeat it.”

In other words, former President Mahama cannot run away from his past mismanagement, while telling 'forgetful' Ghanaians that everything is wrong with Nana Akufo-Addo's regime, and that he (JDM) has learned from his monumental mistakes. The question is: What are the 'mistakes' Mr. Mahama committed when he was in charge as Ghana's president? Confession before contrition?

That was exactly the point the Asantehene hammered home to the NDC presidential aspirant that the past, the present, and the future work in unison; indeed, the three are inextricably connected. However, Mr. Mahama has deployed thousands of diehard followers, tirelessly trying to persuade Ghanaians to wipe clean the slate containing all of ex-President Mahama's misdeeds and rather put the focus on Nana Addo and his people-centered policies.

For smart and history-oriented leaders such as Otumfuo Osei Tutu II, hiding under the cloak of contrition is not sufficient for one to be forgiven of all one's past infractions. Rather, it takes a person with sincere and strong moral compunction to let the stakeholders/citizens know what the actual mistakes are, and the steps taken to ensure that those past anomalies will not be repeated in future. Surely, it was about time someone with backbone provides Mr. Mahama with this straightforward advice. He got the right advice from an unexpected place, because almost all the people around the former president are 'hosanna crowd'.

He is also political science lecturer.