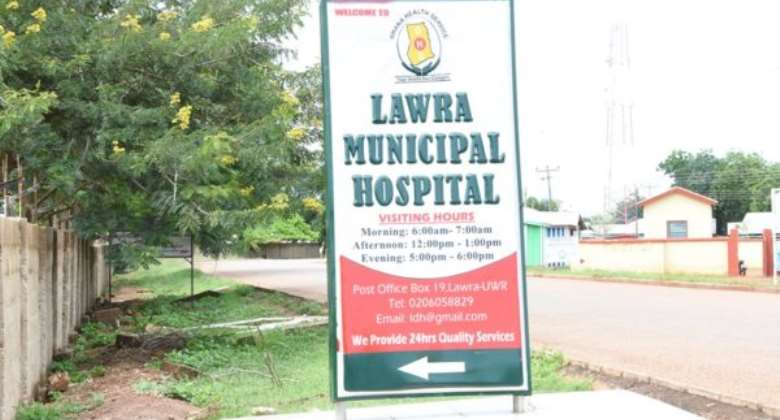 Established in 1928 by the colonial administration to catering for the health needs of the indigenes of Lawra and its environs, the Lawra district hospital, now christened Lawra Municipal hospital (I don’t know what that is supposed to mean though), have over the past 92 years done its bit in carrying out this basic function, albeit substandard and unacceptable in most circumstances. But hey, make no mistake! That has been and remains the first point of call should any infirmity befall us (us, I mean the unfortunate poor!). As a result, one would have thought that the stakeholders (municipal assembly, politicians, traditional rulers, etc.) would have transformed this colonial facility into one with the semblance of a modern-day hospital. Unfortunately, this has never been the case. Admittedly, though successive governments have done their bits in upgrading the health infrastructure of the hospital, a lot is still required taking into cognizance its status as a municipal hospital and the increasing demand for quality care from residents.

It is an open secret that the hospital has had a very checkered history regarding medical officers and its management. The absence of a resident medical officer in a greater part of its existence has often left the healthcare needs of the people in the hands of nurses and medical assistants. This has affected the health and the lives of people within the catchment area who have been subjected to the ordeals of substandard treatments and sometimes needless but preventable deaths. Need I remind you of the number of people who as a result of the absence of a medical officer has had to embark on very perilous journeys across the length and breadth of the region in search of a medical officer? As for the number of people who have died or developed complications as a result remains a statistic!

Currently (I am talking about 2019 & 2020), the hospital has been without a medical officer for more than a year and the district director of health services now doubles as the medical superintendent. Unfortunately, he is overwhelmed by the responsibilities at the district health directorate and hardly is available to handle his duties at the hospital. He cannot be faulted in any way because he cannot simply divide himself into two to manage these two entities. As an acephalous institution, it is bedevilled with worker absenteeism, unprofessional conduct, substandard and fragmented care, and irresponsible behaviour. Worker absenteeism is an all-time high with some principal officers reporting to work only when NHIA reimburses the facility. The weak link in the hospital is leadership. If the hospital had a good leader, they wouldn’t pay cash for materials to fence a backyard garden for an officer when the lab had no reagents to run critical investigations and your pharmacy empty! If all of these do not ring a bell in your ear, then what else will? There were instances when patients with lacerations were sutured “raw” (I mean without any form of anaesthesia) and I have been a witness to such cruelty. Pregnant women walk in there with optimum vitals for both mother and foetus and the next moment they become a statistic. Just do an unscientific survey and it will shock you to the marrow how many people are running to other hospitals (notably Nandom & Jirapa) for delivery and other services.

The workers have successfully run down the hospital to the extent that medicines on the NHIS Medicine List (ML) which should be dispensed to card bearers free of charge has become non-existent. We are back to the dreaded “cash and carry” system with a difference. Clients are given prescriptions and directed to pharmacies and chemical shops to purchase the drugs. As for the laboratory, it has hit a dead end! Basic investigations that any clinic should be able to carry out are not done including but not limited to haemoglobin (Hb) level estimation. The usual excuse is the “no reagent syndrome”. Painfully, clients who need these services are directed to a private laboratory outside the hospital which is owned and managed by one of the biomedical scientists of the hospital. Ultrasound scans, X-rays and other radiological services are but a luxury.

The national health insurance authority (NHIA) was established under the National Health Insurance ACT 2003, with the primary objective of securing the implementation of a national health insurance policy that ensures access to basic healthcare services to all residents. The people of Lawra are not getting this basic healthcare that they are contributing to. It was in the light of some of these mishappenings that a new law, ACT 852 was passed to replace ACT 650 which among other things sought to introduce transparency, reduce corruption and gaming of the system. As for the NHIA, but for political expediency, a proper audit would have led to the downgrading of the hospital to the status of a clinic if not terminating its contract with it as one of its service providers long since. The authority must therefore up their game in supervising, monitoring, and evaluating the services provided by the health facilities to its members. This will ensure that the quality of basic healthcare is provided to subscribers.

From the above narrative, though very summarized, it is evident that the state of the Lawra Municipal Hospital is one of despair, uncertainty, substandard, and care that is fragmented. The outlook in terms of quality, accessibility, and affordability is nothing but gloomy. We have all sat back and the hospital haemorrhaged into shock and now on life-support. If we do not rise to the challenge and this level of mismanagement continues, in the not too distant future, we will be celebrating its demise. Quiet unfortunate. Isn’t it??

Let’s remember that Lawra Municipal hospital is all we have and we must jealously work to protect and improve it. Our loud silence is deafening and our inactions unacceptable as a people. It might be somebody today but tomorrow awaits you (God forbid it though). This is a rather long write-up which you might not enjoy reading but I think it is worth it. I leave you with the words of Martin Niemöller to meditate on:

They came for the columnists

Because I was not a columnist.

Then they came for the socialists

Because I was not a socialist.

Then they came for the trade unionists

Because I was not a trade unionist.

Then they came for the Jews

Because I was not a Jew.

To speak out for me.