By Kassim Traore and Serge Daniel 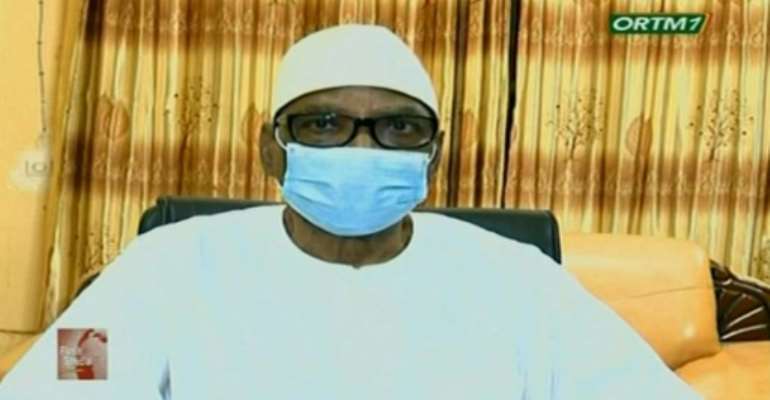 Keita announced his resignation on TV in the early hours of August 19 after being held by rebel troops. By - (ORTM/AFP/File)

Mali's new military rulers said Thursday that former president Ibrahim Boubacar Keita, who was detained during the country's coup on August 18, had been freed.

The announcement came on the eve of a summit by Mali's neighbours, who are to decide whether to ratchet up pressure on the fledgling junta.

Keita's ouster by rebel troops sent shockwaves through the region and in France, which sees Mali as a linchpin in its campaign against jihadism in the Sahel, where more than 5,000 French troops are based.

"President IBK is free in his movements, he's at home," a spokesman for the junta, Djibrila Maiga, told AFP, referring to Keita by his initials, as many Malians do.

The junta, calling itself the National Committee for the Salvation of the People (CNSP), said on Facebook it was "informing public and international opinion that former president Ibrahim Boubacar Keita has been released and is currently in his residence".

A Keita relative, speaking on condition of anonymity, said the 75-year-old former leader had returned overnight to his house in the Sebenikoro district of the capital Bamako.

Keita, prime minister Boubou Cisse and other senior officials were seized by young officers who mutinied at a base near Bamako. By ANNIE RISEMBERG (AFP)

The source did not say whether he was still subject to any restrictions.

Keita, prime minister Boubou Cisse and other senior officials were seized by young officers who mutinied at a base near Bamako.

In the early hours of August 19, Keita appeared on national TV to announce his resignation, saying he had had no other choice, and wanted to avoid "bloodshed".

His release -- and other leaders -- is a key demand of Mali's neighbours, its ally France and international organisations, including the African Union and European Union.

Former Nigerian president Goodluck Jonathan, heading a team from the regional bloc ECOWAS, was given access to Keita last Saturday, and said he seemed "very fine."

The announcement Thursday came on the eve of a virtual summit by the 15-nation ECOWAS -- the Economic Community of West African States -- which has imposed sanctions against Mali for the coup.

Those measures include a closure of borders and a ban on trade that threaten to worsen Mali's already severe social and economic troubles.

Jonathan's three-day mission to Bamako foundered on the question of the transition to civilian rule.

The junta have promised to enact a political transition and stage elections within a "reasonable time" but not spelt out details.

Discussing progress with Nigeria's President Muhammadu Buhari, Jonathan said the coup leaders wanted to stay in power for a three-year transition period, an offer rejected by the mediators, according to a statement from the presidency.

"We also told them that what would be acceptable to ECOWAS was an Interim Government, headed by a civilian or retired military officer, to last for six or nine months, and maximum of 12 calendar months," Jonathan was quoted as saying in the presidency statement late Wednesday.

Keita was elected in 2013 as a unifying figure in a fractured country and was returned in 2018 for a second five-year term.

But his popularity plummeted as he failed to counter a bloody jihadist campaign that has claimed thousands of lives and driven hundreds of thousands from their homes, and to reverse the country's downward economic spiral.

In a visit to the Estonian capital of Tallinn on Thursday, the head of the French armed forces, Francois Lecointre, said, "Our wish is to maintain the Malian army's commitment in the fight against armed terrorist groups."

He pointed to an campaign launched earlier this year to regain control over the strategic "three-border" zone, where the frontiers of Mali, Niger and Burkina Faso come together.

"We are going to see if the Malian armed forces are able to maintain the momentum... we have told them that this appears essential to us," said Lecointre.