"Papa No" Brouhaha ; Breaking The "Future No" 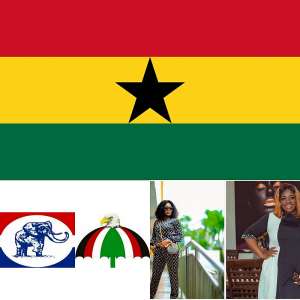 I write when I am happy. I write when I am sad. I write alone, I write in paragraphs, at least I used to write along issues of general life ;the citizen's and country's makeup. What a country, with sweetness here and there. There are fainted turkeys, boozed guinea fowls, convulsed chickens as dead goats are being mauled by avarice vultures. Are you getting the picture I'm trying to paint?

I have seen and heard a lot of things happening as we continue to chart the journey of our democratic dispensation; paths of smoothness and roughness. I'm not a political prophet nor a political beast. I'm a young Ghanaian messenger of hope but my message strings and pierces.

Without a doubt, August is turning out to be an interesting place. A place where all and sundry gets to tell his or her own story. Some of the stories have horns, claws, clutches and some even have beards. These make it difficult to navigate our way through the tough political terrain. Interestingly, I have monitored events back home since Belinda Nana Ekua Amoah popularly known as Mzbel and Tracey Boakye's fight over a man they're both dating or better still they're both having sexual relationship with came up.

The girls are talking. Political spinners are spinning. The strategists are relentlessly strategizing. What more, KON's comment fell flat on the floor of the august house like broken wings of a jetliner. His reference to John Jinapor(Former Deputy Energy Minister) as 'Papa No' triggered hysterical laughter on the majority side with minority side taken offence. And I think his comments was unparliamentary and he did right retracting the 'Papa No' remarks.

It's barely three months to a general election and the most trending topic on Ghana's social media is "Papa No". As a result, the name of a former president has been rumoured as the man at the centre of the beef between the two 'slay queens'. Aspersions and insinuations have been cast at certain businessmen and relatives of some politicians but that has done little to answer the question "Who is Papa No"?What is the Ghanaian politics turning into? Ghana was a beacon of democracy and other African countries looked up to us but has democracy failed us? Why are our “leaders” and highly ranked politicians dirtying themselves in this shameful manner (Papa No).

Once upon a time, "Who said twea" - a puzzle that has remained unanswered till date because neither the DCE or Ghanaians know the person. Mzbel and Tracey Boakye, the two women who are fighting over a man have done everything except one thing ;reveal the identity of the 'Papa No'. The battle for the side chick tablets continues with our politicians taking a dose!

Ghana has been touted as "the beacon of democracy in Africa" because of its relatively stable political stability under its fourth republic. But then, is there any developmental correlation between what has been advertised to the outside world and the reality in the country?

The contraction called "Papa No" must be treated if we indeed want to see Ghana's democracy take the turn of triumph. The unusual notification on my Facebook timeline that I deem too early in the morning to expect a tumultuous message about Tracey Boakye and Mzbel.

Before I could find out reasons to the shouts, insults, outbursts and mockery from the women in question and other netizens, some politicians were adding their voice muddily to the situation at hand. By extension therefore, the hitherto cherished image of the country's democracy becomes irredeemably maligned. Currently, the conversation in town is about "PAPA NO". Meanwhile, our society is replete with ills of banks collapsing, tribal bigotry and divisiveness, pervasive corruption and heist of national treasury just to mention but a few.

Whether democracy will play a central role in Africa's future has been an open question for most of the continent's postcolonial history, and perhaps no events so vividly signify democratic progress as do elections. But by focusing on the details of the contests that democratic transitions, it is easy to overlook the deeper roots of effective democracy which lie in strong institutions and the political cultures that support them.

The state of democracy in Africa is one of the most controversial and difficult questions facing the continent today. Is Africa, for that matter Ghana getting more or less democratically beautiful or ugly? Why has Ghana become stuck in murky middle ground between democracy and "insultocracy"? How can we design democracy so that it better fits Ghanaian realities?

Seeing it as an insulting and dangerous experiment that too often goes wrong. I believe that the early signs were both promising and unpromising and that to keep up the struggle for another generation; democracy devoid of ill-manners needs to be entrenched within the Ghanaian society.

Inevitably, we find ourselves in a country where we are engulfed in so many unwanted issues but have no option than to wake up to them. The serene minds are those that hugged the unpopular pandemic and bidding farewell to the living. Ghana, some say is their step mother's land and to others, their aunt's land.

Many countries in Europe are engaging in a competition on who gets a cure to this notorious virus first so as to boast of power, yet in Nkrumah's land, we're betraying the future. We are teaching the future generations how to make money, make properties, and become famous and end up being ambassadors and what have view, by showing off guns, smoking publicly and sleeping with people's husbands.

Apparently, the media is playing a great role in this menace. The media, which is supposed to be a neutral free, has put on the cloth of these political parties and yet come back to blame society of it.

Tracey Boakye and Mzbel were involved in this fight over sleeping with one man who both agreed is "married". The media is helping them fight this war together and some Ghanaian journalists are inscribing it into the archives of Google so the future generations can chance on it for use. They're granting these guys interviews and giving them that space, meanwhile other craftsmen are out there to have their talents screened on TV and others are still left out there in the gutters.

For instance, Joyce Dzidzor is again in the news boasting of a married NPP MP named "Nana" bought her a mansion. Hmm, Ama Ghana, where were these "women" (I struggled to call them women) raised? These are the role models our young ones are having and emulating.

Go out there and ask the young ladies, those of them, that want to get married like their parents did ; they'll tell you, they want to be single mothers like Nana Aba Anamoah and the Yvonne Nelson's. You see what we have brought upon these kids,yet we will vilify them as we did few weeks ago when we taught them to insult those in authority and they are giving back to society what they learnt like a Corporate Social Responsibility.

I have always asked that if these advanced countries have practiced this form of mediocre democracy, would they have been where they are today? Our democratic abode is resided by individuals who insult and lie. There's no loyalty in the system, and no integrity by politicians. What's being demonstrated in the democracy laboratory of Ghana is "Party First Acidic Concentration ", not "Ghana First" forgetting that political parties met Ghana. The most annoying thing is that they find pleasure in lying and stealing from the state coffers. On top of it all, some sacrifice the interest of the nation for their own selfish and parochial gains by engaging in sexual activities with young girls and women of this country.

I was compelled to ask an intimate friend, Newton Gabriel, is it that before we also become big men, we have to have that diabolic and unwarranted history? Because it seems without it, you can't have the future. Words came against widely admired Kojo Oppong Nkrumah and Sammy Gyamfi. This is the "Future No" we are building and in the future, we'll need another day to add to the 4th August and the 21st September as founders day cos there's a new definition of the future building.

Can the journalists, the media in general,stop giving these issues attention and focus on what is of national and future developments? Young ladies engaging in sleeping with married men for money and mansions and in due time, they become brand ambassadors ; this is Ghana. Stonebwoy ended up punching a colleague's manager, and we see it as a thug life and soon he'll be handed a brand ambassadorial role ; welcome to Ghana.

Let's prepare ourselves for the future married men snatchers and thug ambassadors. The media is always running for these stories and since they generate traffic, who can call them to order? "You don't buy bundle for me to blog, do you?" becomes the answers to why those unwanted materials find their ways into the media landscape.

Ghana no longer held the enviable position as the shining star of Africa in terms of independence and integrity of democratic institutions. We need to be united and resolute to save GHANA. We cannot sit silently and look on as our nation slips towards decadence, all in the name of wealth and party politicking. Children are watching, listening and copying and it is important we serve as good role models.

Are we doomed forever? I do not think so. This piece is a wakeup call to all thoughtful Ghanaians to rise and ensure that the spirit of 'Ghana First' precedes our political interests. Political parties and players should embolden their commitment threshold by engaging in campaign devoid of insults and name-calling but one that provides solutions and hopes to the good people of the country. They should desist from flying at the tangent on insults in an attempt to actualize and fulfil their political aspirations.

The lack of decorum in our parties political undertakings on the part of players and sympathizers will make us perpetual tails and never heads. Let's exhibit and exude democratic qualities that will not jeopardize the entire essence of democracy. The peace and progress of this country is essential for creating a congenial atmosphere for good governance. We have to appreciate the ingredients that make for democracy and good governance. Let's do a rethinking and re-order our steps towards things that will bring collective progress, development and peace to our nation. But "Papa No" note that this is how you're building the "Future No".