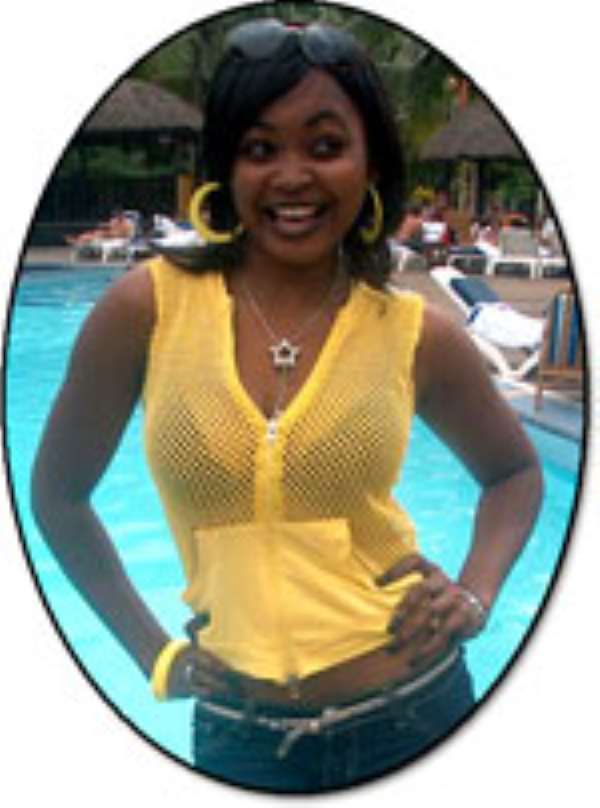 As Ghana Grapples with an unrivalled spate of cocaine-related stories, Daily Guide has stumbled upon yet another sizzling tale of how a popular budding actress, Suzzy Williams who died on September 8, 2005, in a car crash, on the Accra-La road, lived a fast-paced life of drugs and booze.

At the time of her death, speculations and all manner of conjectures about the actress' drug life were peddled. Now a post-mortem report conducted on the late popular actress, by Dr. Lawrence Edusei, a Pathologist at Korle Bu Teaching Hospital, and corroborated by a Ghana Standards Board (GSB) forensic science report, dated October 10, 2005 has showed that Suzzy Williams was bathed in cocaine and alcohol at the time of the fatal motor accident that led to her death.

The post mortem report on Suzzy Williams stated that she had traces of cocaine in her nose, and liver, and high levels of alcohol in her blood, as evident from a nose swab, blood sample analysis, as well as liver and stomach content analysis to determine a toxicological analysis of the deceased.

According to the Korle Bu Teaching Hospital pathologist who examined the remains of the 23-year-old actress, even before he conducted the post mortem examination, “information received from the Lister Medical Services Ltd” (the hospital where the deceased passed away), after the accident, “indicated the impression of illicit substance abuse by the deceased.”

Dr. Edusei had the deceased's blood sample, stomach contents, liver and nose swab sent to the Ghana Standards Board for further tests on September 13, 2005. The result of the toxicological analysis conducted on October 2, 2005 by the Forensic Science Department of the GSB showed that she had traces of cocaine in her nose as found by the nose swab.

The toxicological analysis report by Mr. Alexander Weremfo of the GSB, dated October 10, 2005, indicated that besides the cocaine detection in the deceased's nose, the late Suzzy had a blood alcohol level of 60 mg/100ml. With such a blood alcohol level, an individual, according to the report, may show signs of intoxication such as flushing, loquaciousness (talkativeness) and slowing of reflexes. The report explained that a metabolite, benzoyl ecgonine is formed after the ingestion of cocaine, as evident in the deceased actress.

At the time of her accident in the company of her boyfriend, Liberian man, Edwin Eastman, empty bottles of alcoholic beverages were found in the Mitsubishi Pajero Jr in which they were riding. Eastman admitted being tipsy at the time of the accident, according to police sources. He claimed they were on drinking spree moving from one drinking spot to the other.

When contacted by Daily Guide yesterday on the acceptable level of alcohol in a motorist, the Commander of the Police Motor Traffic and Transport Unit, (MTTU) ACP Victor Tandoh mentioned the figure 0.08mm, far outrageously below the one in Suzzy's blood. While in the living, the breathalyzer or an acco-metre sensor is used to measure the alcohol level in the dead, as in the case of the late Suzzy Williams, her blood sample was drawn for laboratory analysis.

The figure, as shown above, suggests that the late actress, at the time of her demise was virtually a walking brewery. The late actress whose death shocked and numbed her numerous admirers across the nation, was riding on her newly purchased Pajero Jr with registration No. GW 818 W driven at the time of the accident by Liberia-born Edwin Eastman. On reaching a section of the road near the La Palm Royal Beach Hotel off the La Teshie-Nungua dual carriageway, their vehicle skidded off the road and somersaulted several times, throwing the deceased actress off the vehicle.

Suzzy sustained multiple injuries like lacerations, bruises and the cause of her immediate death, according to the pathologist, was a massive hemorrhage or bleeding, which he added was an unnatural cause of death. It would be recalled that when Suzzy was thrown off the vehicle, her head hit the ground. She was rushed to the Lister Medical Centre, off the Spintex Road.

The deceased whose paternity has remained a contentious subject, was the eldest daughter of her mother and died at a time when her name had assumed a household phenomenon across the country. At the time of her death, the deceased had won a contract with a movie company in South Africa, after featuring in a Reggie Rockstone music clip, shown during a KORA awards function.

In her school days at Meadow Preparatory & Junior Secondary School in Darkuman, Accra, she was crowned “Miss Meadow 97”. She came into limelight with her appearance in the TV3 soap series, “Bloody Mary”, “Things We Do For Love” and “Official Prostitute”.
D-Guide