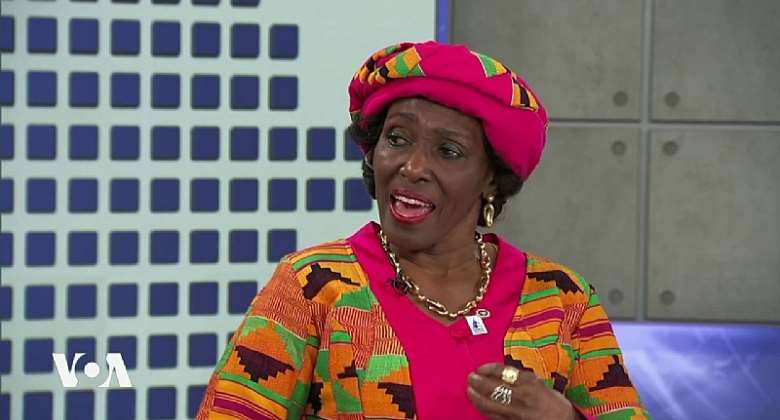 He said she even wanted to succeed her husband, Flt. Lt. Jerry John Rawlings, as President when he (Mr. Rawlings) was exiting power in 2000 after 19 years.

In his book 'Working with Rawlings' which has opened a can of worms and is threatening cohesion in the NDC, Prof. Ahwoi said on page 191 of the book that “Nana Konadu Agyeman-Rawlings had been harbouring presidential ambitions and in 2000 had believed that she would be the one her husband, Jerry Rawlings, would hand over to.”

He stated, “'Madam had serious ambitions and was angling to take over from Jerry and so when Jerry made it clear in the Swedru Declaration that his preferred successor was Professor Mills, Nana Konadu felt that the Professor (Mills) had stolen something that belonged to her', a one-time close ally of Nana Konadu Agyeman-Rawlings told me.”

Prof. Ahwoi appeared to portray Mrs. Rawlings a 'bitter' person in the book and said she even rejected goodwill gestures from Prof. Mills.

“President Mills on his part tried many times to reach out to Mrs. Rawlings, but she would not budge. He is even alleged to have offered her the position of Foreign Minister in his government, following the lead that President Obama had shown in dealing with Mrs. Hilary Clinton, but Nana Konadu is alleged to have refused

the position,” he claimed.

I was informed by one of the people I spoke to in the course of writing this book that it was Herbert Mensah who acted as the liaison between the Rawlings household and the Mills Presidency, but still things did not work out.

“It came as no surprise therefore when Nana Konadu announced her intention to challenge President Mills as the NDC presidential candidate for the 2012 presidential election,” he added.

“The party announced the programme for its presidential primaries which were scheduled for July 2011. She proceeded to create her campaign machinery, 'Friends of Nana Konadu Agyeman-Rawlings' or FONKAR, for short. FONKAR was a very effective machinery that was deployed to do maximum damage to the personality of President Mills.

Spearheaded by Kofi Adams, the then Deputy General Secretary of the NDC, and made up of a group of young, acerbic-tongued NDC political neophytes who had no really deep roots in the NDC, FONKAR lost no opportunity to vilify President Mills and heap insults on him with joyous abandon.

“To counter FONKAR, GAME, or 'Get Atta Mills Elected', the internal campaign machinery for President Mills, was resurrected with full force. It activated all its old structures, cells and networks and created new ones and criss-crossed the country with the message that a Nana Konadu presidential candidacy would be sacrificing a

2012 NDC presidential victory to the NPP on a silver platter,” he disclosed in his book.

Prof. Ahwoi said, “On the Congress Day itself, the overwhelming victory in the offing for President Mills was evident when his entry into the Sunyani Coronation Park was greeted with rapturous, thunderous, tumultuous and deafening applause, while Nana Konadu Agyeman-Rawlings and President Rawlings entered almost unnoticed,” adding, “The strength of the NDC and the assertion of its independence from the control of Jerry Rawlings and his wife manifested itself very clearly at the 2011 Sunyani Coronation Park Congress.”

“At the end of the voting, President Mills won with a landslide margin of 96.9%, leaving Nana Konadu Agyeman-Rawlings with a paltry 3.1%,” he added.

He said after her defeat, Mrs. Rawlings started a propaganda that the congress was bought by the Mills group.

“Feeling humiliated by her embarrassing showing, Nana Konadu moved her FONKAR machinery into action with the fiction that President Mills doled out large sums of money to buy votes from the delegates. FONKAR also alleged that the election was rigged in favour of President Mills,” he stated.

“Some claim to know it for a fact that Jerry Rawlings in very private conversations confessed that he was not in support of his wife's attempt to contest President Mills but was unable to make it public in order to maintain marital harmony. Others claim to have witnessed a public exchange of words between the couple at the Golden Tulip Hotel in Kumasi on their way from the Sunyani Congress. I was unable to confirm or deny these claims.

“Hopelessly defeated and in the knowledge that she and her husband had lost their hold on the NDC, Nana Konadu Agyeman-Rawlings and her FONKAR supporters broke away from the NDC and moved to register a new political party, the National Democratic Party (NDP),” he added.

Call e-levy a VAT increase and stop distorting our well esta...
47 minutes ago