What Did We Do Wrong? Poor Road Condition In Adjei-Kojo And Neighbouring Towns In The Tema West Constituency 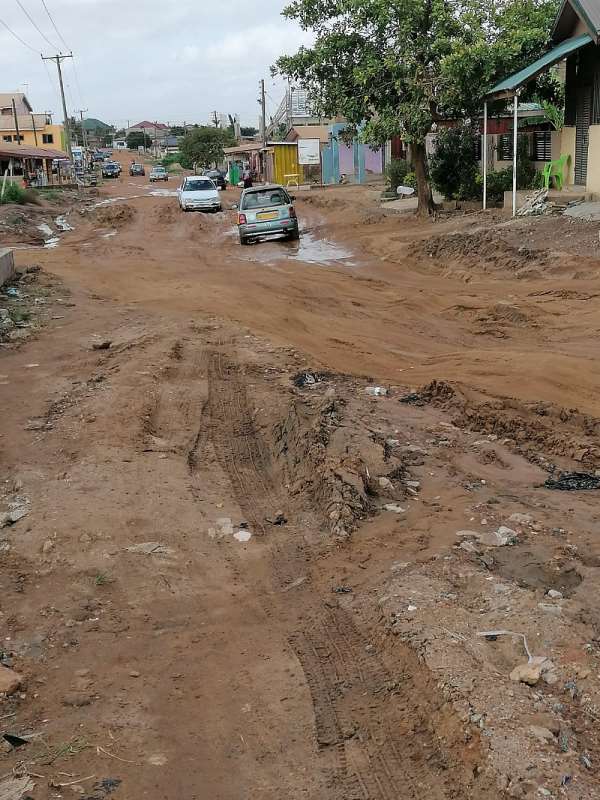 There is no doubt that there are some visible indices that mark Ghana out as a developing economy. Over the years, scholars from the so-called Global South and some sympathisers from the Global North have contested the categorisation that Ghana or Africa is a developing country or continent respectively. But beyond the academic debates, there is a stark reality that as a nation we are faced with multiple challenges. Some of these challenges have made life very difficult for many Ghanaians. This is not the same as saying that the political elites are not investing time and resources to turn the destiny of the nation around.

For the past few years that I have lived in Adjei-Kojo in Tema West Constituency, I have increasingly become aware of the poor road networks in the area. Consequently, since the re-democratisation of Ghana in 1992, residents have made it known to the political elites about this challenge. In many cases, some political improvisations and strategies have been cultivated by residents to compel Members of Parliament to make promises of constructing the roads in the constituency.

As a major characteristic of politics, political aspirants always promise to construct the road, but most of them vanish into thin air after elections and only return when their four-year mandates expire and need renewal. But like a bad omen that operates on a cyclical basis, residents in the constituency appear not to exit from the cycle of always complaining about bad roads. Suburbs in the constituency where the roads have been heavily unmotorable include Adjei-Kojo, Kanewu, Global and Sun City.

Many vehicles have broken down on these roads, sometimes at wee hours of the day – exposing the lives of road users to armed robbery attacks and other forms of dangers. During the rainy season, some commercial drivers refuse to convey passengers to and from the communities in the constituency. Sadly, every onset of rainy season escalates the poor road network in the constituency, specifically the suburbs mentioned earlier.

The poor states of our roads have a debilitating effect on all aspects of life, particularly economics. Most traders struggle to have their commodities transferred from the commercial towns in Accra. This development has increased the cost of living in the area. Certainly, this is against the background that most of the residents of these suburbs are involved in the informal sector of the economy where income levels are very unpredictable and inadequate.

As the nation anticipates heavy downpour this year, residents in the Adjei-Kojo, Kanewu, Global and Solomon City of Tema West constituency, like elsewhere in Ghana, are left to count on the divine to avoid any fatal accidents as a result of the bad roads. But it is rather curious to ask about how long we will continue to call on the divine when what it takes to construct the roads are right within the means of the nation.

Since the residents in Adjei-Kojo, Kanewu, Global and Solomon City are also Ghanaians who pay taxes to support the developmental agenda of Ghana, we are asking the political elites to honour their many promises of constructing the roads in these communities. It is rather becoming obvious that our political elites in the constituency have not shown enough commitment to solving our challenge.

We call, therefore, on the Ministry of Roads and Highways, as well as other stakeholders, to respond to the needs of those of us residing in the Tema West constituency. While some residents may deploy voting strategies, such as holding placards that read “no roads no vote” to force state structures to get the roads, we are painfully aware that such strategies have not worked to our advantage. This is precisely because of the political fragmentation of the constituency. As a resident of the constituency, I am calling, therefore, on government and other stakeholders to come to our aid.

If Tema is to recover its past glories as the industrial hub of Ghana, then the political elites must turn their attention to the developmental challenges of the constituency.

West Gonja: We didn't know the bags of rice were for our chi...
10 minutes ago