Did Prof. Ahwoi Expect Political Jejune Rawlings To Think Deeply Like Aristotle Or Plato Of The Ancient Greek? 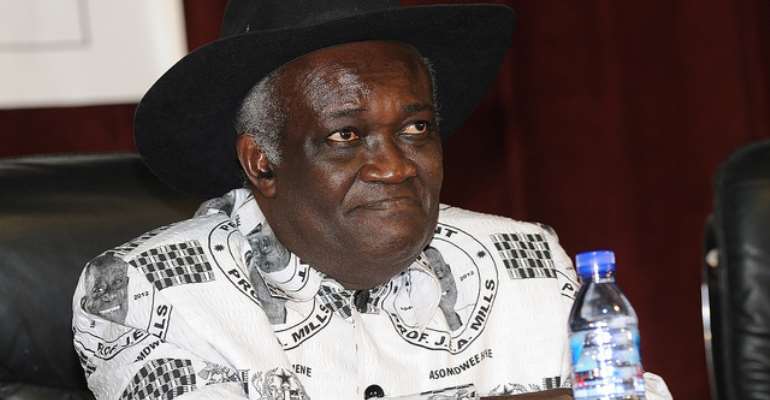 Indeed, I don't know the full content of this book authored by Prof. Ahwoi, but were I this Prof. with all these years of experience coupled with the huge family benefits the Ahwois derived from the same JJ as a president then and the NDC as a party, I wouldn't be wasting my time to write a book about an event that can't add any value to our struggle to advance in our development as a country. Honestly speaking, it's like crying over spilt milk.

What's the motive behind the book? Is it to expose who the person you have allowed to use all the negative things you now see and talk about today to rule the country for many years or to settle a grudge you bear with him and the NDC? Whichever way it goes, I can still tell you, Prof. that you're a part of whatever he might have done because, you served under a man you only see today as "not Philosophically and ideologically deep". But did you expect an ordinary junior military officer of his calibre to think deeply like Aristotle or Plato of the ancient Greek? You knew who the man was and having intellectually gifted personalities like you and the many others, who had the opportunity to work with him was to help him do the thinking he lacked. Therefore, to me if he did well it was you and if he failed, it was still you. There is, therefore, no need to come back and tell us(Ghanaians) what you think about him. I believe you wouldn't have said all these negative things about him if you're still that good friends you were. So, are bitter now because you don't control the NDC just like your good old friend JJ?

The real problem about our inability to develop is how we always want to be charitable with the truth in many unpleasant situations. We also often refuse to be proactive in our decisions making process and this often goes a long way to impede our progress in development as a country. Can you imagine what good you would have done if you came out with all these stuff about this man earlier? You would have saved many of the unpleasant happenings you turn to describe now. But what happened? You're fine with all that he did and only see it as a problem today. There is something you're not telling us! But don't forget your family did benefit from the same. Even but you claim was both good and bad and you don't have the moral justification to tell Ghanaians how you feel about him. You knew who he was and got what you wanted so why today?

Maybe it could also be that, you want to confess before joining your maker. That's another reason I see in the writing of this book, which you're set to launch at this time of our political uneasiness situation as a country. Once you're part of all these negative stories of the man, who you worked under for so many years, you can't be clean and claim not to have contributed to all that he did right or wrong. You're not equally a saint!

Let me tell you what I think might have brought all this brouhaha between you and your old buddy. Just as your one time very good friend JJ is losing grip of the party he founder or let me just say has lost grip and has turned the heat on the party and those he thought should have be worshipping him, you're equally going through same fate and you think " well, if I don't matter anymore in your affairs, then let me tell the whole world who you're. In fact, to me this book is not about JJ but the entire NDC family, which will suffer from any negative comments in the book. And I must say that's your real intention. You intend nothing good for a party you once dominated in its affairs and all you wish for it now is to cause emotional and political disaffection to it as many will see the NDC not worth voting for.

Gone are the days when your friend's(JJ) voice was the voice of the NDC. Today as we talk, he has lost the prestigious position as well as his respect in the party. You seem to have been part of those who pushed him to that dark corner in the party as you and your family became the voice of NDC after JJ ended his political career as president. Just as the saying goes " he who pays the piper, calls the tunes" you were calling the tunes in the late Prof. Mills administration. You're virtually running the government. All the appointments under the late Mr. Mills were done by you and your family. Just like JJ, your behaviour wasn't the best to many in the party but they couldn't talk because, you made literally, Mr. Mills the president and you must have your own way about how things should be done. This is where you and your old buddy drifted apart in your long-standing relationship.

My grandfather once said that people shouldn't blame the man who drinks a lot and becomes useless, but that, they should blame the good palm wine tapper, who brews quality stuff. But that's it! We can't blame JJ alone for any ness he might have subjected this country to. We must reasonably equally blame all those who worked with him and most especially, the likes of Prof. Ahwoi and the many intellectuals who were supposed to guide and guard the man through the right path of decent political engagement. Most of us grew up knowing that, the man, JJ intended good for the country, but lacked that political shrewdness as he wasn't a well-groomed politician but a mere junior military officer. I will always, therefore, blame those intellectuals he got to him develop the country and who only developed themselves and their families in the course of their work.

You have written many good books which are useful to enhance our local government service. I will advise you to look at the modern trends of local government activities and come up with more relevant books to help strengthen the local government operations and stop wasting your gifted brains on what has no benefit to us. The local government system needs your talents and experience more than Ghanaians need your stories on who JJ was or wasn't. It will add nothing to our development as a country.

NPP may lose 2024 elections if Bawumia is imposed as flag be...
56 minutes ago