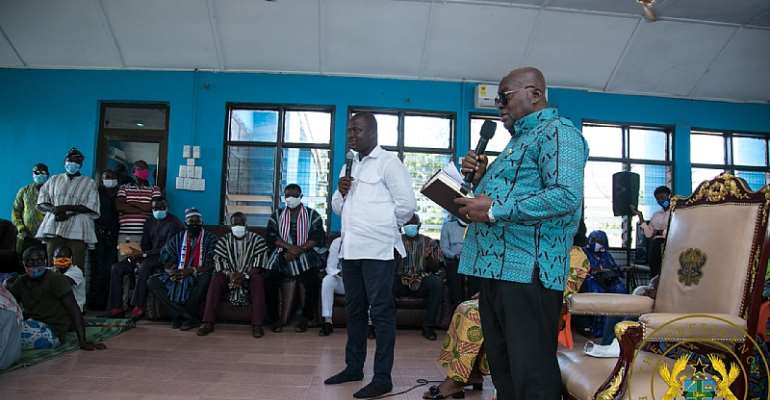 President Akufo-Addo has expressed satisfaction with the arrest of five persons believed to have taken part in the lynching of Akua Denteh, the 90-year-old woman who was accused of witchcraft in Kafaba in the Savannah Region.

He is hopeful the prosecution of the five will serve as a deterrent to others.

The President was speaking at Damongo as part of his tour of the Savannah Region.

“I am happy that the Regional Minister says five people have been arrested and will be arraigned. I beg you. We do not want to hear of such an incident again,” he said.

The President had earlier said the lynching had disfigured the nation and prayed for justice to prevail.

The five suspects were handed over to the Criminal Investigations Department (CID) of the Savannah Regional Police Command at Damongo after their arrest on Wednesday.

They are currently on remand for three weeks and have been formally charged with conspiracy to commit murder.

The only other arrest over the lynching was that of the Chief of Kafaba, Zackaria Yahaya, who was questioned by police.

But the main suspects following the lynching, a traditional priestess and two others, are yet to be picked up.

The priestess is said to have fingered Akua Denteh as a witch. The incident was captured on camera and went viral.

What followed was public outrage and condemnation of the culture of witchcraft accusations.

The priestess is believed to be the woman in the video leading the lynching.

Aside from the main suspects in the lynching, the victim's family maintained that the chief had some knowledge of the activities of the priestess.

The police put up a bounty of GHS2,000 for information leading to the arrest of the perpetrators.