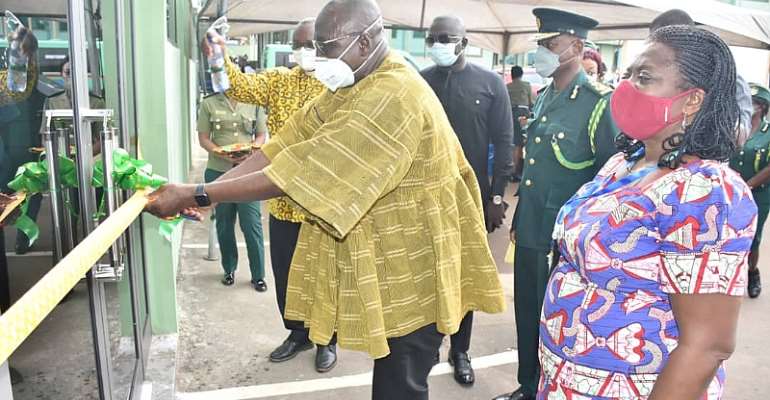 The Ghana Immigration Service (GIS) has expanded its Clinic located at its national headquarters in Accra to provide quality health care to its officers and stakeholders.

The expanded clinic will cater to the increasing medical demands by serving personnel and retired staff, as well as immigrants seeking work and resident permits who need to undergo medical examinations as part of the requirements for the processes.

Since its establishment in 2017 through a partnership between the GIS and the St. John's Hospital and Fertility Centre, the clinic has not seen any expansion works.

The expanded clinic now has three additional consulting rooms and a laboratory to provide diagnostic services such as mammography and digital rectal examination (DRE).

At a brief inauguration ceremony in Accra last Friday, the Minister for the Interior, Mr Ambrose Dery, said the expansion was in consonance with the government's commitment to ensure the general wellbeing of security personnel in the country.

He encouraged management of the GIS to open similar clinics at other Regional Commands in the country to enable Immigration Officers serving in these regions to access health care.

“The Ghana Immigration Service should do well to recruit the appropriate personnel that will enable them to check the health status of people” he stated.

The Comptroller-General of Immigration, Mr. Kwame Asuah Takyi, noted that the long term goal of the Service was to make the Clinic a world-class Hospital dedicated to the health needs of expatriates and combating infectious diseases at the frontiers of the country.

For his part, the Chief Executive Officer of the St. John's Hospital and Fertility Centre, Maame Yaa Afriyie, explained that expanded clinic would provide health care services to Immigration Officers, immigrants, and the general public.

“The essence of the expansion is to provide immigrants who are already in the country with medical examination, give protection to the citizens of the country as well as immigration officials, she noted.

A/R: Journalists on tour with Regional Minister involved in ...
37 minutes ago

Focus on promoting human rights, be swift and fair in applic...
39 minutes ago