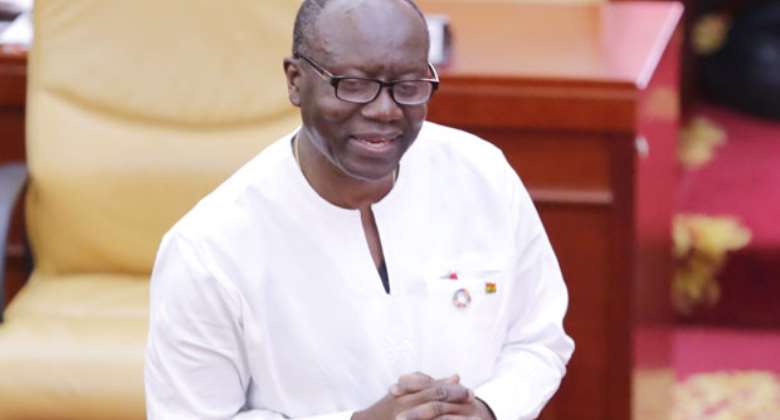 INTRODUCTION
Right Honourable Speaker, Honourable Members of Parliament, on the authority of His Excellency, President Nana Addo Dankwa Akufo-Addo, I beg to move that Honourable Members of this august House approve the Mid-Year Review of the Budget Statement and Economic Policy of the Government of Ghana and Supplementary Estimates for the 2020 Financial Year, which I present today, 23rd July 2020. Mr. Speaker, I am performing this function in accordance with Article 179 (8) of the 1992 Constitution, Standing Order 143 of this august House, as well as Section 28 of the Public Financial Management Act, 2016 (Act 921).

1.2 million farmers nationwide. OVERVIEW OF RECENT MACROECONOMIC DEVELOPMENTS Let us be in no doubt, Africa is facing its first recession in 25 years. A recession which threatens to exact probably the heaviest human toll in peace time Africa. It is our responsibility, as leaders, as the people's elected government, to work out and execute an intelligent, ambitious and all-inclusive recovery plan, than none other, that will steer this nation and her people out of the recession before us. That, Mr Speaker, is the daunting task facing us in Ghana today. Update of Macro Economic Developments in 2019 GDP Growth 19.9 percent. Inflation Monetary Aggregates and Credit 9.7 percent compared to 1.1 percent in 2018. Credit distribution was broad-based, with almost all the key economic sectors recording higher growth in 2019 relative to 2018. The main beneficiaries were Services (24.1%), Commerce and Finance (20.9%), and Manufacturing (10.9%). Interest rates 15.2 percent, from 15.0 percent over the same period. Rates on the secondary bond market also remained broadly stable. Balance of Payments International Reserves position of US$7.0 billion at the end of December 2018. This was equivalent to 4.0 months of import cover recorded at the end of December 2019 compared to 3.6 months of imports cover as at December 2018. Exchange Rate Fiscal Developments Revenue Performance Expenditure Performance Overall Budget Balance and Financing Macroeconomic Performance from Jan - June, 2020 Growth Inflation Monetary Aggregates Interest rates Balance of Payments International Reserves Exchange Rate Fiscal Performance Revenue Performance 16.2 percent below the programmed target of GH¢19,952 million or 5.2 percent of GDP. The lower than programmed performance in non-oil tax revenue was driven by the underperformance of non-oil tax handles such as Domestic VAT, Petroleum Excise taxes, Domestic National Health Insurance Levy, and GETFund Levy. However, personal income tax and Communication Services Tax both out-performed their respective targets for the period. Expenditure Performance Overall Budget Balance and Financing Public Debt Developments 2020 Eurobond Issuance The Financial Sector Clean Up and Bailout HIGHLIGHTS OF IMPLEMENTATION OF KEY INITIATIVES IN THE 2020 BUDGET

96.  Mr. Speaker, the restoration of allowances for trainees has brought relief valued at   GH¢ 994.23 million to 50,825 and 48,000 nurses and teacher trainees respectively between 2017 and December, 2020. An additional GH¢57 million had been released for 48,200 nursing trainees at the end-June 2020. This is true relief for students and guardians while advancing our efforts to build a robust health and educational systems.

Industrialization Infrastructure Development COVID-19 IMPACT AND MITIGATING MEASURES Global response to COVID Impact on Ghana Government's leadership and immediate response Health and case management. The implementation of the Plan was anchored on the 3Ts – Testing, Tracing and Treatment. Social GETTING THE ECONOMY BACK ON TRACK—THE COVID-19 ALLEVIATION AND REVITALISATION OF ENTERPRISES SUPPORT (CARES) PROGRAMME CONCLUSION Let me reiterate, Mr Speaker, the President's plan for the next three and a half years.

‘Ghana is broke’, bear with government over its domestic deb...
59 minutes ago