Do You Know Why Berekum Is Called The Golden City? 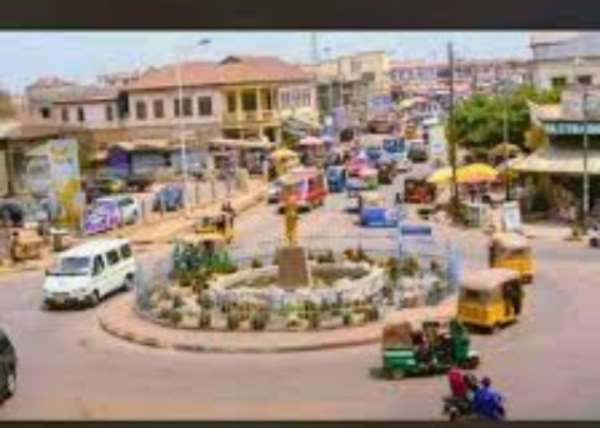 During which time Goka became a centre of religious pilgrimage, at the height of renowned prophetess Maame Sarah of blessed memory's miraculous works, a rich pilgrim from Berekum sought spiritual guidance from the prophetess against his pursuers who were after his life, wealth, and bed.

This rich pilgrim from Berekum was one of the few who was honoured to share a dinner table with the English Candace, Queen Elizabeth II, on her visit to a new republican Ghana.

Agya Kofi, as he gave his name, the rich pilgrim made his riches from farming, Cocoa farming. And his home, one of the seemingly sky-kissing storey buildings that lined the edges of the Berekum paved roads, earned the city its name; the Golden City, pronounced by the very saintly mouth of the British Queen.

Agya Kofi, as he told the nephew of his host, a Prince, and an heir apparent to the Domeabra throne of Goka, he's a major contributor to the success story of Berekum and the Republic of Ghana. A doing he'd expected to be loved by his kinsmen and compatriots, but had to, now, as a fugitive, exiled himself to Goka and be clothed under the wings of the prophetess if he will live to expiration in peace, but not extinct through violence and cruel murder.

His crime. As the first president of Ghana, Kwame Nkrumah mobilised cocoa farmers who can't again succumb to the manipulations of the overseas companies that bought the raw cocoa beans at a give away price, he joined the patriotic Ghanaian farmers who gave out bags of their products to be burned as a registration of their displeasure to the exploiters whose only aim was a ravenous patronage, a cheating win-loss, not the gentlemanly win-win marketing. A single demonstration that skyrocketed the price of the indispensable product, and within few years, as they the farmers got good deals, they proved the sagely words of Kwame Nkrumah that:

"When given the chance, the Blackman is capable of managing his own affairs".

Agya Kofi and his friends changed the look of Berekum. No slums were seen in the streets, nothing befitting of sane men lacked the Berekum people. Schools, health facilities, business centres, and the gilded looks of the people alone was royalty.

For such a praiseworthy doing, Kwame Nkrumah, hosting the visiting Queen who was bent on establishing a lasting embassies with the newly independent Ghana, owing to her vast bequeathed resources, had to enplane Queen Elizabeth to Berekum, meeting the farmers behind the envious feat. As she stepped out of her motorcade, the occupant of the Buckingham Palace, with a glowing brightness and amazement in her eyes, praised: "wow, what a Golden City".

From that day forward, and even as today's Berekum is a pale-shadow of its beautiful past, the relished relic of the vestige of Golden City exists in the fancied minds of the inhabitants and natives of Berekum. Though the useful hot embers of old have long burnt into useless ashes.

Agya Kofi, per his hardworking, deserved a monument built in his name to immortalise him, but like they who waste their youth in idleness and only bet their hopes on murdering and inheriting industrious men, he was in Goka as a fugitive, learning from abundant testimonies that the Goka prophetess not only guide good souls to live an exemplary lives. Or never lied in her prophecy as John IV, successor to Atta Mills, himself testified that until he became president of Ghana, he'd doubted the prophecy on his life as the next leader of Ghana by the Maame Sarah. The prophetess cover the pursued, and repel unjustifiable murder, and in many cases, yoke same fate in the necks of the immoral aggressive killers.

Goka then is the ideal refuge for Agya Kofi. And for the many years he lived there, he disguised himself as a middle-class gentleman, and the Goka people saw him always in the company of the learned Prince, who repaying Agya Kofi in kind for benefitting from his tutorials in building ideal kingdom even with proceeds from farming, taught the rich farmer how to read and write in the Ghanaian Language Twi, and that of the Queen's English Language. The farmer would later be known as lettered.

Agya Kofi outlived his detractors, and those who salivated on how they would take his life and warm their beds with the Harem he built, their hopeless widowed spouses threw themselves to the feet of Agya Kofi, and were accepted as concubines to the now busy on books rich farmer.

In the first year of Addo Dankwa, the successor to John IV, as a president of Ghana, Agya Kofi was given the highest honour, Order Of The Star Of Ghana. And as an ambassador for the Ghana Cocoa Industry to negotiate with chocolate companies against the disproportionate market deals, the Coronavirus Covid-19 induced global lockdown trapped Agya Kofi in the Communist Republic Of China, the birthplace of the global pandemic. And as remarkable of his life, Agya Kofi died a noble death there as he fought a noble fight in seeking the best for Ghana and mankind.

The Chinese authorities reported the Berekum hero died of the novel virus, and therefore cremated his remains.

Though Covid-19 took away a beautiful soul, but not with him a lasting legacy and the maidens from her palace he affianced to the Goka Prince, adjuring him to continue the good fight, and always put God and country first in everything he did.

If Agya Kofi contributed to a city that was christined Gold, the Goka Prince is on the path to leading Ghana to its beautiful past of Gold Coast, a Paradise status, and a pilgrim's pride. Because, he's doubly blessed with his own learning and the guidance of history of his forebears.

To make a mark in the sand of history, the archived life of Agya Kofi is the religion that is bent on proselytizing faithfuls that would rebuild Ghana to her deserving status.