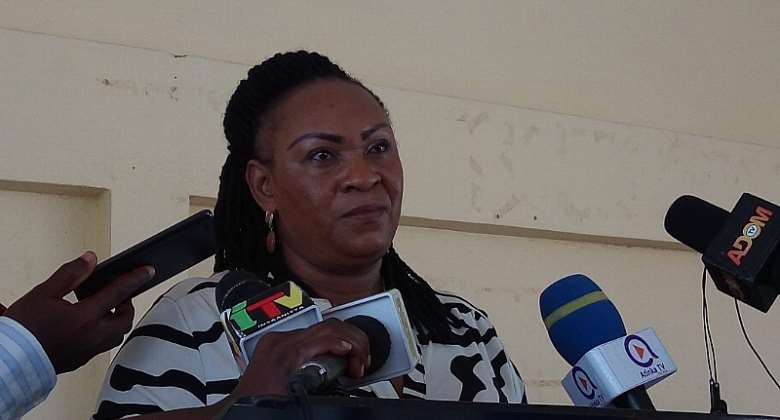 A security analyst, Colonel Festus Aboagye (Rtd), has backed calls for the Member of Parliament (MP) for the Awutu Senya East Constituency, Mavis Hawa Koomson to be brought to book after causing mayhem in her constituency at a voters’ registration centre.

Mavis Koomson had admitted that she fired a gun at the Steps to Christ registration centre in her constituency on Monday after some confrontations with some NDC members in the area.

According to her, she fired the licensed gun as a warning shot to defend herself.

Other gunshots were fired and three motorbikes burnt during the altercation.

Even though many Ghanaians are demanding for her arrest and prosecution, or resignation, theories indicate that she cannot be arrested because of privileges that come with holding a parliamentary position.

It is believed that but for the permission of the Speaker of Parliament, members of the House cannot be picked up by the police for offences committed.

On Eyewitness News, however, Colonel Aboagye said he is hopeful that eventually, the Speaker of Parliament, Prof. Mike Oquaye will after the necessary procedures, grant access to the Awutu Senya MP so she can be made to face the law like any other Ghanaian.

“If she has fired a weapon that she has said she is entitled to because she is an MP, although that can be debated, then the police must take her through a due process. They must have access to that weapon and compare the ballistics of that weapon to the weapon that the police retrieved from the four other persons.”

He continued, “And I hope that as soon as possible, the Speaker of the House will grant access to the MP. The reason why it must be done is that granted all the immunities and privileges that the Constitution has caused to MPs, they are equal and must be equal before the law. So it is in the interest of the honour that is attached to Parliament for them to make themselves available in cases like this.”

Colonel Aboagye (Rtd) further stressed that the case must not be treated as a simple case as what the MP did could have caused so much havoc in the constituency and country at large.

He exclaimed, “I vehemently disagree with anyone who suggests that this is a petty case. This is not a simple case. Slowly but steadily, we are descending into chaos and the levels of political violence are becoming a bit more rampant. Her action had disrupted the whole registration process. We cannot treat this case lightly. So anyone wanting to suggest that she fired it in self-defence wouldn’t understand what the issues are. So on the basis of how jealously we need to guard and uphold national security, this cannot be an ordinary case, especially in an election year where we know that tensions are on a rise.”