Gratitude: The Philosophy Of It 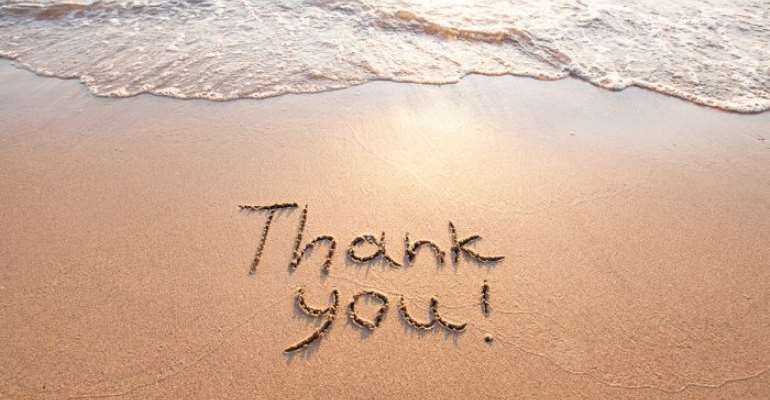 When the people of Israel were journeying from the wilderness to the promised land, they had many challenges on the way. They complained about everything, from lack of water, food, and insecurity as they faced the occupants of the promised land. In all of this, Moses managed to mediate on their behalf to implore God to respond to their needs.

So, when Moses was about to part ways with the Israelites, he cautioned them about the dangers associated with prosperity. He passionately cautioned them:

When you have eaten and are satisfied, praise the LORD your God for the good land He has given you. Be careful that you do not forget the LORD your God, failing to observe His commands, His laws and His decrees that I am giving you this day.

Otherwise, when you eat and are satisfied, when you build fine houses and settle down, and your herds and flocks grow large and your silver and gold increase and all you have is multiplied, then your heart will become proud and you will forget the LORD your God, who brought you out of Egypt, out of the land of slavery.

He led you through the vast and dreadful desert, that thirsty and waterless land, with its venomous snakes and scorpions. He brought you water out of hard rock. He gave you manna to eat in the desert, something your fathers had never known, to humble and test you so that in the end it might go well with you.

You may say to yourself, “My power and the strength of my hands have produced this wealth for me.” But remember the LORD your God, for it is He who gives you the ability to produce wealth, and so confirm His covenant, which He swore to your forefathers, as it is today (Deuteronomy 8: 10-18).

Moses’s passionate caution to the Israelites has important lessons for all of us. He carefully told them how they were nothing and were not even powerful in any way, but the Lord made them great. Moses told them that they were only slaves in a foreign land and yet the Lord saved them.

Certainly, Moses was/is sagaciously speaking to us. Our world today has made unprecedented strives in overcoming some of the debilitating challenges of life. Landmark technological advances have helped us to push back common challenges such as poverty, diseases, hunger, and “premature” deaths. Knowledge has also expanded significantly in our world. And, compared to the previous centuries, our world has been less bloody.

Nevertheless, atheism has equally increased significantly in our world. This is to the extent that we discount the existence of God. The belief in God is considered countercultural and counterintuitive. God has become the object of ridicule in the media. In the classroom, God is the whipping boy. Our century has become very hostile to God.

We have become a people that gives no room for the existence of God. It is either God is dead, in the logic of Friedrich Wilhelm Nietzsche, the German philosopher (1844 – 1900), or He is an old man who has retired from the affairs of the world. In the face of stupendous prosperity, we have become “masters” of the universe. The illusion of self-sufficiency has resulted in we seeing ourselves as demigods.

As the world intensifies its crusade against the Triune God and anything that has to do with Him, Moses cautions us not to remain oblivious to the goodness of the Lord. Just as prosperity has the façade of causing us to think of God as a “thing” of the primitive past, Moses is reminding us that we are still mortals. We are still dependent beings who must be cautioned against arrogance.

And either way, we have become insensitive to the plight of our fellow human beings. Human beings have become the measure of all things (as said by Protagoras, the Greek philosopher of the fifth century BC).

The idea of human being as an image-bearer of God has been shelved in the face of technological advancement. While we were created as dependent beings and social beings, technology has removed us from the source of our ontological existence – the Triune God. We have become online beings rather than social beings. We have consequently lost our sense of thankfulness.

In the following, I will highlight the importance of gratitude in our relationship with God and our neighbours. Thus, both theocentrically and anthropocentrically, gratitude is the heartbeat of life. It is what defines our humanity.

Third, through our dependence on God and the expression of incompleteness through gratitude, we become humble. We do not become conceited. We realise our limitation and the need to collaborate with others to live well, as well as fronting for the common good of humanity. This is because we become inclined to give God credit for all our achievements.

Fourth, when we are grateful people, we appreciate the need to be selfless in our relations with others. For example, as a Christian, I acknowledge that my salvation is wholly the work of God alone. I did not contribute anything to make my salvation possible, since salvation is by grace alone, through faith alone and in Christ alone.

I admit that God chose me before the foundation of the earth, Jesus Christ, through His vicarious death on the Cross of Calvary, purchased me, and the Holy Spirit sealed my salvation. I did not contribute anything in the process. In the end, I see the need to sacrifice my time and other resources for the good of my family, friends, and neighbours.

Sixth, studies have shown that persons who are grateful in all things tend to have a healthy and positive outlook about life. They tend to be happy and physically, cognitively and emotionally robust. The opposite is true about persons who are ingrate.

As Christians, the Bible admonishes us to “come before God with thanksgiving” (Psalm 95:2a). We are also encouraged to “give thanks to God in all circumstances, for this is God’s will for you in Christ Jesus.” In the face of challenges, it is difficult to thank God, but I pray that the Lord will graciously unveil a little of our blissful future to us to see our glorious end (Romans 8:18).

In conclusion, I want to thank all my families and friends who sent me messages, nourished with blessings, on the occasion of my birthday. I was/am humbled by the outpouring of messages from my supervisor, seniors, and colleagues. I am very grateful. In many cases, we bless in love, so I assume that you all blessed me because you love me. In return, I pray that the Triune God will be gracious and merciful unto all of you. I pray He blesses you in all good things.