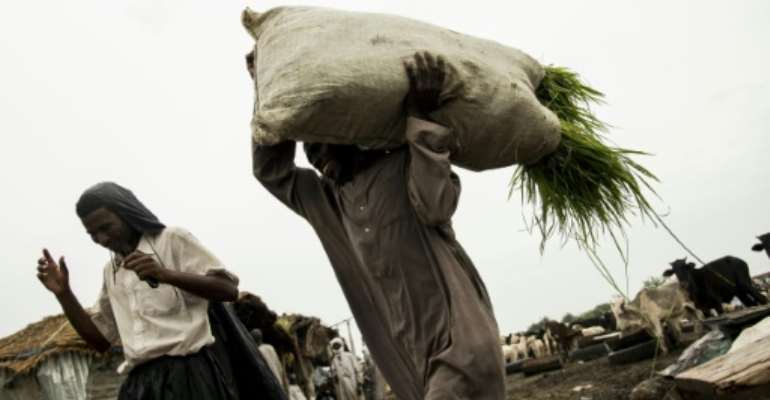 The burden of Chadians has become heavier since COVID-19.. By Xaume Olleros (AFP)

At a restaurant in Chad's capital N'Djamena, the last remaining employee cuts a lonely figure as he goes about jobs usually done by an entire crew, from cooking to staffing the bar.

The eatery with its large paved courtyard has been all but abandoned by customers since the central African country imposed coronavirus restrictions in mid-March.

"I've had to furlough seven of my staff," he says.

Civil servants and office staff used to flock to his place, Petit Bassam aka "Chez Ramses", located on one of the capital's main arteries, or to the many other restaurants in the Gassi business neighbourhood.

But now it's just Ramses, battling boredom with his mobile phone, and his chef-turned-factotum, whiling away the empty days.

Landlocked Chad imposed some restrictions immediately after its first coronavirus case was detected on March 19.

The government has reported just under 900 virus cases since then, and 74 deaths, for a total of 15 million inhabitants.

The measures, including the closure of universities, schools, places of worship and some businesses, were never as strict as in other countries.

But they still shook the economy, already one of the weakest in the region even after two decades of oil production, to the core.

What makes the economic situation of N'Djamena's middle class, made up mostly of shopowners and employees, so perilous is the absence of any social safety net or personal savings.

Ramses now finds it difficult to feed his four children.

"I was OK for the first two weeks of the crisis," he said.

"But now we can't afford three meals a day like before. We're surviving thanks to the solidarity of others."

Some of the people out for a stroll in Gassi wear face masks, which are mandatory, others simply pull their kadamoul, a traditional turban worn by men, further down to cover their mouth.

Few bother with social distancing, saying they have bigger problems to deal with.

"It's tough to pay the bills, it's tough to make ends meet," said Gervais Leonard Mbaidanem, who manages a cyber cafe in Gassi that has been deserted by its regular customers, students, since their university courses were suspended.

Further down the street, 35-year-old Saleh Idriss Moussa, who owns a stationery store near the courthouse, used to be relatively well off.

"With my takings I can't even pay for a single employee," he says.

Established businesses may find survival a challenge now, but for Chad's poorest inhabitants, dependent on odd jobs, it's become close to impossible.

"Now that's become difficult. I can hardly earn the 2,000 francs CFA I need to cover the cost of renting my bike," he says.

Like everyone here, Halil hopes for an early relaxation of lockdown measures, but much economic damage has already been done.

The World Bank now predicts the country's GDP will fall 3.1 percent this year, reversing a forecast of 2.9 percent growth made last year before the pandemic.

Chad's poverty rate is projected to rise to 43 percent of the population from 40 percent.

The government has promised to help, with President Idriss Deby Itno pledging 943 billion francs CFA to boost the economy.

‘Sputnik-V procurement contract must be re-examined’ – Kwaku...
6 minutes ago

Getting Sputnik-V vaccines from black market using middlemen...
6 minutes ago