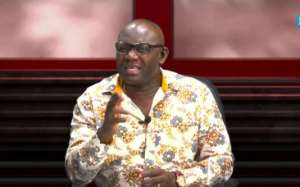 Hot FM Presenter, Justice Kweku Annan who is also the host of 'The Seat' on Net 2 TV owned by NPP MP Kennedy Agyapong has accused undercover Journalist, Anas Aremeyaw Anas of acting in bad faith by petitioning the National Media Commission to take disciplinary actions against him for allegedly collecting bribe to tarnish Anas image.

According to Mr Annan, the accusations by Anas that he (Mr Annan) is working to destroy the image of Anas are totally false.

Mr Annan who is host of current affairs programme, Ghana Must Know on Hot Fm says his outfit has been working on a project that cites Anas of forming a land guard brigade to terrorise people and they have spoken to a lot of people including Anas himself concerning the said project.

“We have a recording of him saying whatever we are talking to him about should not go on the record but we have him on record,” he told Evans Mensah on Newsfile Saturday on the Joy News channel.

The broadcaster also described as “ludicrous”, the claim of Anas that some persons he had investigated had bribed him (Annan) stop a story from being aired on Hot FM.

He explains that the work under contention is a piece that has been in progress since 2017, therefore, a recent video supposedly released by Anas’ team which had him allegedly taking money from some persons implicated in the ‘Number 12’ documentary, is regrettable.

“They should bring the full video out,” he challenged.

Mr Annan explained that the money he was filmed receiving is “commitment fee” paid by an agent to help dig further information into the dealings of the undercover journalist.

The said agent was purportedly a relative of one of the officials caught up in Anas’ Number 12′ documentary that detailed corruption in Ghana football circles.

The agent has however, now been established as an ally of Anas.

Mr Annan said it is wrong for Anas to send someone to him under false pretences to say they want more stories that expose Anas and turn around to purport to use that interaction to drag him to the Media Commission.

Latest Photo Reports
Catch up with all the political quotes from our politicians.
Advertise here
More Headlines
ModernGhana Links
Asantehene charges IGP to combat proliferation of arms
2022 budget: Politicians have betrayed Ghanaians – Martin Amidu
Let's disband witch camps; it's barbaric, indictment on conscience – Jane Naana
Some few cops use the ammunition to engage in criminal activities, weed them out — Asantehene charges IGP
1st Deputy Speaker’s ruling on motion for rescission of approved 2022 budget wrong – Iddrisu Haruna
Court withdraws arrest warrant for Xavier-Sosu after reporting himself
Joe Wise ‘abandons’ seat for 2nd Deputy after chaotic ruling on Minority’s motion
All my appliances have been destroyed by ‘dumsor’ – Otumfuo
‘A Deputy Speaker is not a Speaker, I’m an MP’ – Joe Wise
TOP STORIES