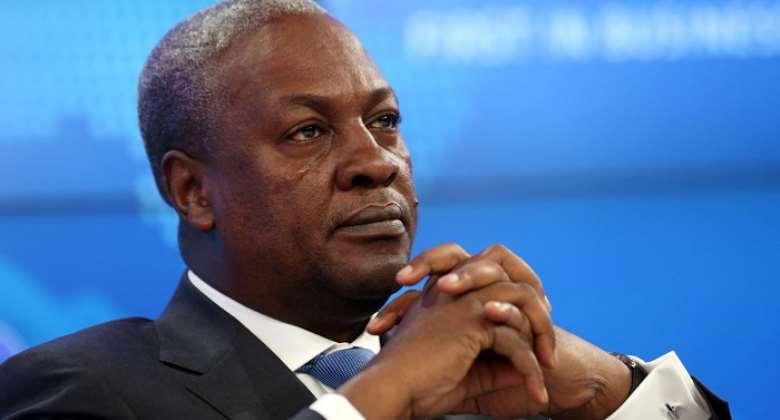 The Oxford dictionary defines politician as "person engaged or interested in politics" and politics as "science and art of government; political affairs or life of principles etc". A politician is defined as one who is actively involved in politics or who holds or seek political office. Politicians play a central role in our lives. They are the concentrated voices of the people that make all efforts to improve their constituencies and people's welfare.

The former President and his party (NDC) have supported the Covid-19 fight and the restriction measures announced by the President. There is also a broad consensus about the methods adopted to battle the pandemic.

The former President has spoken extensively about the pandemic and made some suggestion to the government and Ghana's efforts to tackle it. Keeping aside his suggestions for now, the most important point that the former President made was that we need a united front to defeat the virus. It is the time to unite and fight a common enemy, the virus.

The former President's statement echoes the general tone adopted by all decent opposition leaders across the global political spectrum. The former President also thanked health workers and those providing services in these challenging times. The former President has also put together a Covid-19 rapid team to support the fight. There may be underlying differences in approach. But it is important to note that this is rare moment in our democracy, which is otherwise marked by constant arguments, rancour, squabble, battles, and bitter contestations. The gravity of the crisis is such that, notwithstanding the bards exchanged every day by parties communicators and social media warriors of differing persuasions on Facebook, Twitter etc, there is a spirit of cooperation that is unprecedented in recent times.

A fake politician, will after taken the oath of office with the holy books and lousy thanksgiving services, use their power as an end in itself, rather than for public good, making them indifferent to the progress of their citizens. So far, the former President has become the image of his creator. He gives high regard for morality, national cohesion, law abiding with no tendencies to primitive politics. Ghanaians trust in him has increased because of how he has carried himself in opposition and his good sense of characters and qualities composed of values, beliefs, traits and skills.

His integrity and technical skills to handle complex national issues, fiscal matters, policies, projects, ideas and initiative solutions to problems have won him more admirers. This supplemented cooperation coming from the former President is commendable, for it is only when the political class in a united manner takes on a challenge across federal units, that there can be a commonality in the action plan and the implementation of it. This has indeed happened. The former President and his party have supported the Covid-19 fight from public education to distribution of food, PPEs and other items.

But beyond that, the opposition's job is not to go along with each government measure or action. It has to, while being supportive, critique the government if it is falling short, in a careful and calibrated manner by remaining constructive, and not adversarial. This too, has happened. Despite experts consistently pointing to the need for greater testing as a way to identify the spread of the infection the government has been slow. But the opposition has been right in pointing to this gap and the former President was right in identifying the lack of testing kits and laboratories as a pressing need. This has pushed the government to do more.

The lack of PPEs for health workers has been a gap in Ghana's response. Here too, the opposition along with health experts and civil society organizations, have increased pressure, legitimately on the government to deliver.

Democracy isn't war as they say. Though it can be shot through with unpleasant exchanges, it requires a high level of respect between opposing parties and politicians. This is why many Ghanaians including my own self vehemently criticized the Vice President, Dr. Bawumia over his response to the former President. I am not sure the Vice President is principled as we were made to believe. We heard him admit in 2016 that the former President had solved the perennial power crisis. His only problem was that; Ghanaians should not commend him for fixing the problem because he caused it. That is another inaccurate assertion. Our power crisis did not start under the Mahama administration. All administrations encountered same challenge especially, the Rawlings and Kufour administrations. Apart from the lack of enough generation, the West African pipeline problem also contributed to the problem so, to make a claim that it was internally generated is mind boggling.

The latest IMF figures published on their website also gives credence to what the former President said about the state of our economy. Fanatics, liars, tribal bigots can all have sincerely and deeply held principles, and they can make great sacrifices to advance those principles. Yet that doesn't make them worthy of admiration and respect.

After listening to the Vice President, I asked myself: so, does this man appreciate the legacies the former President handed over to him personally? He is now the government's ICT Chief. Has has been relegated to that position for reasons known to him and his boss. But the truth is: the information and Communication and Technology (ICT) sector, started seeing tremendous growth under the Mahama administration. The administration's strategic investment in the sector has led to the growing internet connectivity, availability of cheaper smartphone and rapid rise in social networking and we seen an increasing emergence of digital-savvy consumers.

The Mahama administration played a major role in promoting the ICT sector as the next growth engine for Ghana. The Communication Ministry under Dr. Edward Omane Boamah was helpful in enhancing the attractiveness of the ICT sector. The ICT sector is playing enormous role in the Covid-19 fight. That's is where you find the really admirable, really respect-worthy, opponent. There are people in politics who are promoting truly valuable ends. Or, at least, they are promoting ends we agree are valuable. The former President is one of such politicians. He might disagree with you, perhaps dramatically, on questions of everyday policy. But his disagreements are always grounded in a shared appreciation of the many and varied interest of the people affected by a policy.