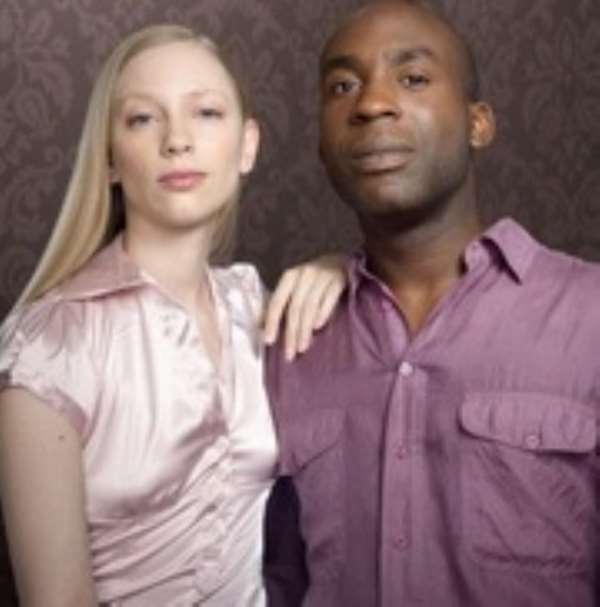 It was my last week in Kenya and I was just about to be shipped off to Australia. There I was, casually sauntering through Carnivore trying to convince older women that I still wasn't being breast fed. Out of the corner of my eye I saw a friend of mine, drunker than a depressed brewery worker, come staggering down. He staggered directly to me, plopped his hand on my shoulder and delivered a monologue that I will probably never forger until the day I die. I paraphrase:

“You guy as you ship over, remember something….(dramatic pause) Those Western women love black d***. These chicks wait at the airport with signs just chilling for the next black dude to step off the plane..(At this point, I drifted off into fantasy land imagining the possibilities of what he had just told me)”

You can't even imagine what that did to me. As I stepped on that Kenya Airways plane, I had a pep in my step and I wasn't looking back. And then I arrived!!!

So What Do I Know Five Years Later?
I am glad you asked. I have been in boarding school in the country, Christian schools, public schools, different cities, different states and different Universities. I have hung out with Kenyans, Ghanaians, Zims, Tswanas, Ugandans, Asians, Indians, Caucasians the whole shebang (btw what type of word is shebang? who came up with a word like shebang?).

My observation is pretty simple. African men being mighty conquerors who head on over to Western countries and can seduce any Western woman they want because they all swoon over him: by and large that's a myth!

There are in general five types of Western women who get jungle fever for African men:

Low Self Esteem and Overweight
I have put these two together for one reason. Now ladies, please, correct me if I am wrong: I have noticed that as far as woman are concerned, even in this post-feminist age, majority of women still pretty much value themselves on the basis of their beauty and/or their desirability to potential suitors.

If you don't believe me, Google 'Weight loss' and see how many results come up. Go to the supermarket and check how many of those magazines talk about fabulous dresses and ways to please your man. Finally, tell a girl she is stupid and unemployable and watch her reaction. Finally tell her she is ugly and no one will ever find her attractive.See which of the two derives a stronger reaction (btw please don't actually do this experiment to see how hurt someone gets, I can tell you right now in my experience it's the ugly comment that hurts the most)

So let's assume you now agree with me. Now out here in the West, fat women aren't generally considered beautiful. Therefore if women feel they are not beautiful and desirable they tend to feel pretty worthless and have self-esteem and self-confidence issues.

Cue the African Man
I won't even bother explaining and philosophizing on it……I've got two stories for you:

The Story of the Fully Stocked Fridge (An African Man's Take on Why We Sleep with Fat Western Women, again I paraphrase. Actually anytime I quote someone, assume I am paraphrasing and not giving you a verbatim quote unless I state otherwise): So you're in the club and you know, you are not there to preach. You have three missions, chill with your boys, grab a cold one and finally maybe leave with a little something something…..

So you check in the club it's maybe 9:30pm, sit down and start vibing with your boys. The pints start coming and a good time is being had by all. Then around midnight,you start to feel your soldier down south telling you it's time to go hunting.

Then you notice something out of the corner of your eye but you push it aside. Around 2:30 a.m. that thing that was taking up just a corner is now taking up the ENTIRE space of both your eyes. She's a big woman and you're like, “There's no way…there's just no way.”

At 3 a.m., you rewrite your rules and draft a new constitution. And so you look around and say to yourself, “Enyewe njaa ni mbaya (the hunger is bad).”

3:15a.m., you are there with your hand outstretched, asking her if you can connect the dots. Talking is just a formality and after a quick convo, you leave together.

Now the great thing about sleeping with a big woman is come the next morning. You have finished your work. Now she's a big woman so you've just put in overtime on that shift. But when you go to the fridge…..”

“….Fully loaded! If you're a broke or a student, it's like going to heaven. By sleeping with big mamas you save $50 in shopping every week.”

So What's the Game Plan?
The Book Review (This is another friend of mine telling me about a book he had just recently read):

“The guy who wrote the book is a bright guy. Now anytime you look at a group of chicks, there is always either an ugly one or a fat one, sometimes they are the same person. Now other guys will be campaigning for the other chicks, but you, you're a time saver. You compromise on quality for the evening and you slide on in to the unattractive often neglected friend. A bit of flattery, make her feel beautiful and boom, you're in.”

Btw both stories are true, a bit exaggerated but very very true.

Has a Drug Problem and Wants to Be Down
Again these two are very much related. These women tend to be the women who are knee deep into the hip hop culture and think that African is one big country where we ALL listen to hip hop and act like 50 cent-Ask someone who's been in the West a while and you learn this stereotype is surprisingly common.

So after listening to enough Bone Thugs n Harmony, they begin to sample marijuana, or a bit of cocaine or speed or whatever. And soon enough they become addicted. What do they do?

1) First they seek people to smoke with. (btw I kid you not, for those of you who haven't found enough odd things on the Internet, there is actually a dating site for marijuana smokers. I guess we all need love…..)

Cue the Black Man
This spot is reserved for the African brothers who are also knee deep into hip hop. In my first couple of years here, it was quite common for people to stop me and ask me if I had any drugs or any pills. So if a white girl finds a brother and he can fulfill he narcotic cravings, it's a match made in heaven, or grown in a coca farm in Bolivia.

A Few Problems Though
1)Some of these women tend to take this trying-to-be-African-American-thing a bit too far and even decide they will try to be drama queens like, “some of the sistaz they saw on TV.” This pretty much guarantees that a quiet night of socializing turns into a session where she huddles up with 'her girlfriends' to talk about, “men aint worth s……”

2) When she tires of the hip hop lifestyle or she outgrows it or the consequences come knocking, she will dump a brother and leave him cold and alone faster than you can say, “She's my woman and she's gonna stand by her………”

The Mandingo Fantasy
In truth, this fantasy probably plays a role in almost all cases of Jungle Fever. This fantasy basically reduces all young black men all over the world into strong ebony love-making Gods with elephant trunks swaying between their legs and the love-making skills of Don Juan in his prime. Women who strongly by into this fantasy tend to have either watched too many movies that talk about how, “brothers are packing down south.” Now I am yet to meet an African man who is willing to argue against this fantasy or attempt to disprove it in any way. I am not about to but it's definitely something that's there and you should know about.

However, if you wanna know what type of women regularly try to test out this fantasy to see if it matches reality, generally they have characteristics 1 through 4 in the list above.

So What's the Point? What Should We Do?
Well this depends on what you want. What my friend promised me at Carnivore is true. If you are coming to Australia just to get laid without regard for the type of person you sleep with, you can. All you have to do is hang around the night clubs and flatter people here and there. In fact a friend of mine's strategy consists of him going to a club sitting down, drinking and waiting for a white girl to come and flirt with him.

However, if you want good quality relationships, as is always the case, it is very difficult to find. What I would advise is you best be bringing something else to the table rather than a promise of a trunk long enough to choke a gorilla.

Article by Mwangi/thedisplacedafrican.com
Please note: This article is not intended to disrespect any inter-racial relationships. The views expressed in this article is of the authors and does not reflect the views of modernghana.com