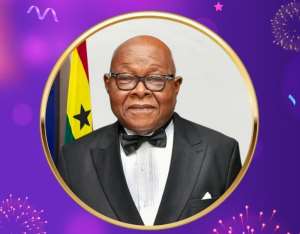 Professor Michael Aaron Oquaye was born on 4th April 1944 to Mr. E.G.N. Oquaye of Osu, Accra (a cocoa merchant) and Mrs. Felicia Awusiki Oquaye, (nee Azu) of Odumase-Krobo – the third of 7 children. He was brought up at Asamankese in the Eastern Region where he attended the Catholic and Presbyterian Schools before proceeding to Presec., Odumase-Krobo (O’Level ) and Apam Secondary School (A’ Level), the University of Ghana, University of London and Lincoln’s Inn, London. He holds B.A. Hons. (Political Science); LL.B. Hons., B.L. and Ph.D degrees.

His working life has been mainly a combination of private legal practice, lecturing in political science, doing active politics and pastoral work.

A barrister of the Supreme Court of England and Wales, he is also a senior member of the Ghana Bar. As an academic, Prof. Oquaye achieved the singular distinction of winning within four years, the coveted International Rockefeller Senior Scholar Award (1993) and the Senior Fulbright Scholar Award (1997). The Fulbright is considered the highest award in Academia. He was a Visiting Scholar in connection with these in London (SOAS), and Virginia (George Mason), USA, respectively. He was Head of the Department of Political Science, University of Ghana, Legon (Oct. 1999-Jan. 2002.). He was Vice-President of the African Association of Political Science (AAPS), with headquarters in Zimbabwe (1997-1999). He won the Ghana Academy of Arts and Sciences Silver Award for his published doctoral thesis, among several awards.

He has researched and written extensively, on good governance, conflict, political education, decentralization and development, human rights, military intervention in politics, NGOs, rural development and gender issues. He is a keen advocate of the rights of women including affirmative action. His numerous books and articles have been published in England, Canada, USA, South Africa, Zimbabwe and Ghana.

Prof. Oquaye is the Speaker of the 7th Parliament of the Fourth Republic of Ghana.

Arise Ghana demo: They're political elements not professiona...
51 minutes ago