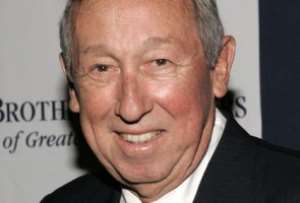 
Roy Edward Disney, the nephew of Walt Disney, died Wednesday after a yearlong battle with stomach cancer, according to a Walt Disney Co. spokesman.

Disney "played a key role in the revitalization of the Walt Disney Co. and Disney's animation legacy," the company said.

He died in a Newport Beach, California, hospital at the age of 79. His father, Roy O. Disney, co-founded the Disney entertainment business with Walt Disney in 1923.

Roy E. Disney's 56-year association with the company culminated in 2003 when he stepped down as vice chairman of Disney's board and chairman of the Disney Studio's Animation Department. He kept the title director emeritus and consultant in recent years, the company said.

"As head of Disney Animation, Disney helped to guide the studio to a new golden age of animation with an unprecedented string of artistic and box office successes that included 'The Little Mermaid,' 'Beauty and the Beast,' 'Aladdin' and 'The Lion King,' " the company said.

A private funeral service and cremation are planned, the company said. His ashes will be scattered at sea, it said.

He was born in in Los Angeles seven years after his father and uncle began building the Disney empire.

His entertainment career began in 1952 after he attended Harvard University and Pomona College with a job as an assistant film editor on the "Dragnet" TV series.

He joined the family business a year later an assistant film editor at the Walt Disney Studios.

He received two Oscar nominations. One was as a writer and production associate on the 1959 short subject film "Mysteries of the Deep," and the second was for his work in 2003 as executive producer of "Destino," a film based on storyboards and original art by the iconic artist Salvador Dali.

Disney founded Shamrock Holdings, an investment company owned by the Disney family, in 1978.

He also was an avid competitive sailor, the company said. He held several elapsed-time records for offshore races in the Pacific Ocean, including multiple wins in the 2,225-mile Transpac race between Hawaii and California, it said.