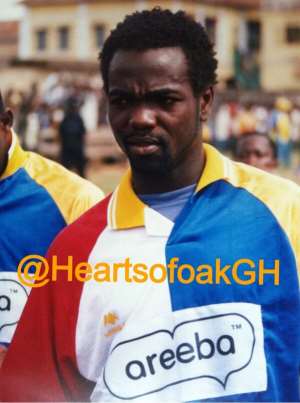 Former Black Stars striker, Prince Tagoe has revealed that he wants to play one season for Accra Hearts of Oak before he finally retires from actively playing football.

The 33-year-old forward played for the Phobians during the early days of his professional career and earned the name the ‘Prince of Goals’ after establishing himself as a clinical striker in the eyes of spectators.

Following over a decade spell around the world playing for as many as 12 clubs, Prince Tagoe is back in Ghana and was training to keep his shape before the football season was suspended as a precautionary measure against the spread of the Coronavirus (Covid-19) disease.

Speaking to Angel TV on Tuesday, the striker noted that he wants to make a return to Hearts and play at least one more year before he finally hangs his boots.

“Am planning to play one season for hearts of oak. I cannot say when but it is going to be soon. Definitely I have to. That is what I have told myself”, the former 1899 Hoffenheim attacker said.

Tagoe in the past had a decent stint with the Black Stars where he scored 7 goals after making 36 appearances.

[Video] We can retaliate but we want the laws to work — Angr...
50 minutes ago