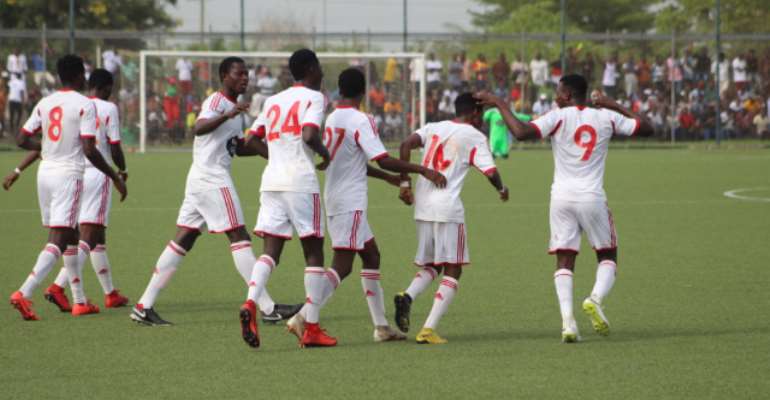 West Africa Football Academy (WAFA) has defeated Obuasi Ashanti Gold 6-1 at the Sogakope Park in the Ghana Premier League this afternoon on the back of an impressive display.

The two clubs have been good since the season started and went head to head today to honour a Matchday 12 fixture of the domestic campaign.

Ashanti Gold who went into the match as league leaders hoped for a win but failed disappointingly after they were totally outplayed by the academy boys who had no problem expressing themselves on the astroturf.

WAFA opened the scoring on the 26th minute through a header from Konadu Yiadom after he outjumped the Ashgold defenders to connect to a good corner kick.

Ten minutes later, it was the turn of the away team to score with a header as Amos Kofi Nkrumah headed a cross from close range to draw level for Ashanti Gold.

An instant reply from WAFA produced another goal for the side when Andrews Manu took advantage of a defensive blunder to restore the lead for the home team.

Despite coming in strong in the second half, Ashanti Gold’s dream of equalizing to get a point at the end of the game was shuttered when Ibrahim Abukari converted a penalty kick to extend WAFA’s lead.

In the second half, the home team continued to dominate as they totally destroyed the visitors with their impressive inter-passing play.

Additional goals from Konadu Yiadom, Owusu Daniel, and Haruna Jalilu Mola completed a 6-1 win for WAFA as they made light work of Ashanti Gold.