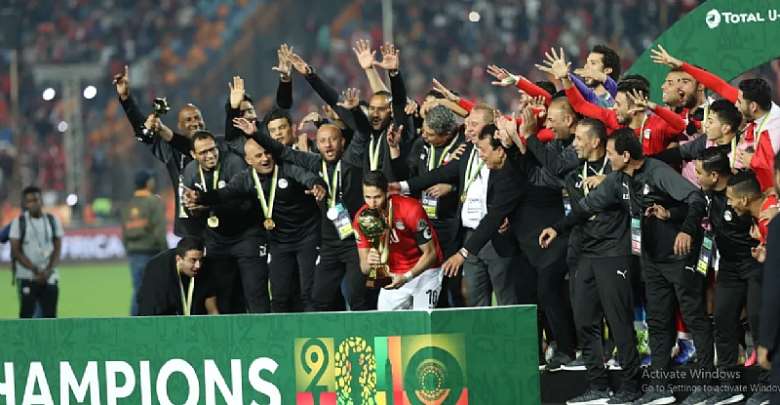 Hosts Egypt capped a historic tournament by being crowned Champions of the 2019 Total U-23 Africa Cup of Nations, defeating Cote d’Ivoire 2-1 after extra time at the Cairo International Stadium on Friday (22 November 2019) evening, to achieve their first title in the third edition of the tournament that also served as African Qualifiers for the 2020 Tokyo Olympic Games.

Karim El Iraky scored for Egypt after 37 minutes, before Aboubakar Doumbia equalized a minute from time. But skipper Ramadan Sobhy won the match for Egypt in the 116th minute.

The Olympic Pharaohs sailed to the title in style, having won their fifth game in as many matches.

Skipper Ramadan Sobhy found his way past his marker from the left side, to send a calling cross that El Iraky responded to with a scorcher to give Egypt a lead they maintained till the halftime.

After the break, the Ivoirians threw everything in attack, and had to wait to the last minute to grab the equalizer. Substitute Abubakar Doumbia who had barely been on the pitch for a minute received a cross to score past Mohamed Sobhy and send the game to extra time.

In the extra time, both teams had their chances, before Egypt’s talisman Sobhy won it for the hosts. Substitute Ahmed Rayan weaved past his marker to send a shot that was rebounded from Cote d’Ivoire’s keeper Elizeir Tape, and Sobhy was the fastest to the ball to score the winner.