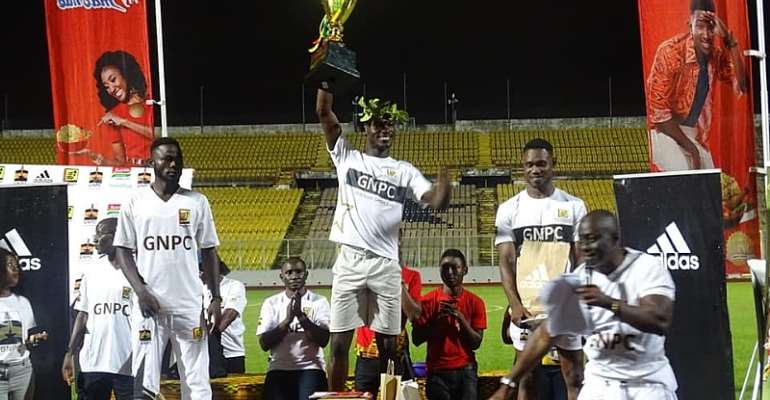 Benjamin Azamati from the University of Ghana proved to be the fastest in Ghana on the tracks at the grand finals of the GNPC Ghana Fastest Human Competition.

The event took place at the Baba Yara Sports Stadium on Saturday, September 7, 2019, and the latest local sensation was a delight to watch on a rainy day.

He run a good time of 10.02secs and he is one of the men to watch out for in the future especially the Olympic Games in 2020.

Benjamin Azamati, who was on the winning 4X100 gold medal relay team for Ghana at the just ended Africa Championships, did not disappoint and blew everyone away to be crowned GNPC Ghana's Fastest Human 2019.

In the Senior Women’s Race, new queen on the block Latifa Ali caused an upset when she surprised the reigning local Queen, Kate Agyeman, and also 400-meter bronze medalist at the African championships, Grace Obuor to be crowned the fastest local lady in Ghana.

In fact, it was excitement galore as the competition received showers of blessings without people getting wet.

According to the chief organizer, Reks Brobbey, “Chale it rained from 'krane krane' to 'krain krain' and at the end of it all, God's name WAS praised!!!

“We created an 'interco' type buzz in the Stadium with different jama groups and even though the rain kept coming, everyone just got in the groove with the various jama groups and didn't mind the rain kraaaa...

“Bravo to all the finalists, their coaches, the amazing spectators, our sponsors, our haters and to God be the glory forever, AMEN!” he said.

He added that there is one more year to go next year to finish this first phase of our 7-year focus on 100 meters so that Ghana wins a medal in 100meters at the Tokyo 2020 Olympic Games.

Already signs are showing with the performance of the athletes at the 12th African Games in Morocco where Ghana placed 4th and 5th in the 100meters finals and won the gold in the 4 x 100meters, beating strong contenders, Nigeria and South Africa.

Medals, certificates and products from the sponsors of the competition were presented to the winners.