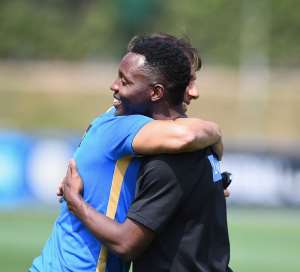 Ghana midfielder, Kwadwo Asamoah has reunited with former coach Antonio Conte at Inter Milan after resuming preseason with the club.

Asamoah joined his teammates on Wednesday afternoon after he was given more days rest following his involvement at the Nations Cup in Egypt.

Conte joined the Nerazzuris in the summer on a three-year deal after a year out of the job following his sacking at Chelsea.

The 50-year-old will now be working with one of his favourite players at Juventus, Kwadwo Asamoah, with whom they achieved so many successes.

The former Udinese midfielder has also described the Italian as one of the best managers he ever worked with.

Conte came close to signing the 30-year old versatile player during his time at Chelsea but Juventus were adamant to let the wing-back leave.

Asamoah left for Inter last season, where he signed a three-year deal and has become a key figure at the club, featuring prominently under Luciano Spaletti.

Inter Milan are currently back in Italy, as they continue preparations towards the start of the new season.