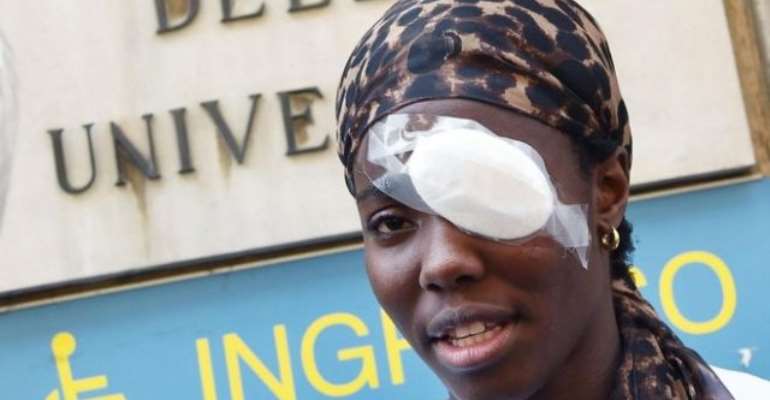 Italian discus-thrower Daisy Osakue has left the hospital after she was hit by an egg thrown from a car, in an attack she believes was racially motivated.

Police in Turin have cast doubt on a racist link, but the attack has inflamed a row surrounding populist Interior Minister Matteo Salvini.

Mr Salvini has rejected claims by political opponents of a "racism emergency".

He argues that the only emergency he is fighting involves crimes by immigrants.

Ms Osakue, 22, whose parents are originally from Nigeria, suffered damage to her cornea in the attack early on Monday in the Moncalieri area of southern Turin.

She had been training in the US for 10 months and had returned to Italy to find "a different country". "Certainly the climate of widespread violence that I see scares me," she said.

She holds Italy's under-23 discus record and is set to take part in the European Athletics Championships which get underway in Berlin on 7 August.

She was concerned that the injury could affect her ability to compete.

"I'll do all I can to be in Berlin," she told reporters, adding that it was just an abrasion and after a few days and some eye drops she should be fine. Was it a racist attack?

The athlete, who has been studying in Texas, insists that she was targeted on purpose by attackers in a Fiat Doblo car as she walked home shortly after midnight.

"They didn't want to attack me, as Daisy. They wanted to hit me as a young woman of colour. That's an area used by prostitutes and I was mistaken for one of them," she said, pointing out that there were other people in the vicinity at the time but she was singled out.

She had been the focus of verbal racist attacks in the past, but when it involved a racist action she felt another wall had been breached.

Police said there had been other attacks involving eggs being thrown earlier in the month and did not suspect a racist link to the latest incident. Last week, three women in the Moncalieri area were targeted as they left a restaurant.