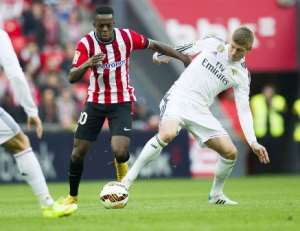 The Ghana Football Association (GFA) has confirmed its willingness to convince Athletic Bilbao's youngster Inaki Williams Dannis to play for the Black Stars.

Born in Bilbao to a Ghanaian father and a Liberian mother, the forward joined Athletic Bilbao in the year 2012 at age 16.

Williams was instrumental in Athletic Bilbao's last match with Real Madrid on Sunday, March 7 in which they won by 1-0.

Hottest Photo Reports
Catch up with all the political quotes from our politicians.
Advertise here
More from Player Profile
ModernGhana Links
13 Hearts of Oak players who go with different identity
UK-based Ghanaian youngster has Satellites in sight
Anthony Yeboah - I Followed My Dreams
TOP STORIES