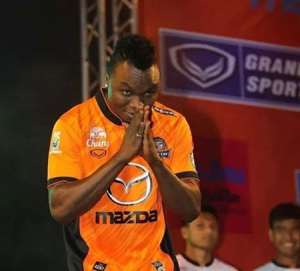 Dominic Adiyiah will have to look elsewhere to get his club career back on track after Thai side Nakhon Ratchasima cancelled his contract, DailySoccerGhana.com has reported.

The 25-year-old was unveiled last week as the club's new striker but the Thai side have sensationally terminated the contract over disagreement over the player's high wage bill.

The ex-AC Milan attacker signed onto a lucrative deal two weeks ago but the board is unsure about his fitness level.

That coupled with his high wages resulted in the decision to cancel his deal.

The news will be massive blow to the man who is desperate to return to his best after failing to live up to so much hype surrounding his career.

Adiyiah will not be able to sign for any club for the next four months after being registered in the Transfer Matching System (TMS).