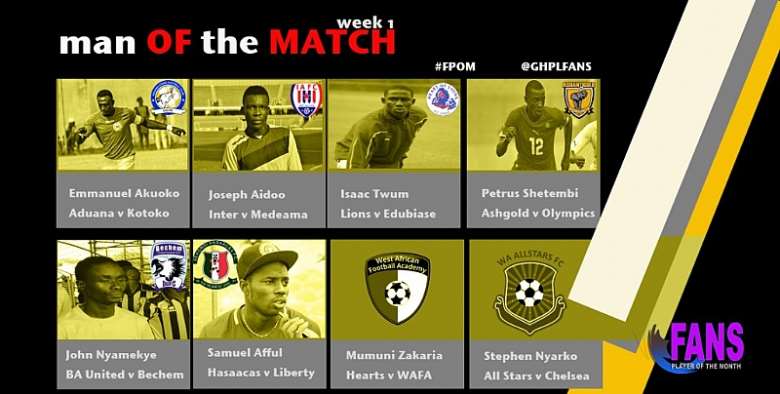 On Saturday at the Kpando Park, Hearts of Oak beat WAFA 1-0 thanks to a Gilbert Fiamenyo striker but it was Mumuni Zakaria from the losing side who was the best player on the pitch.

Also on the same day, Bechem United's John Nyamekye was man of the match when his side lost 1-0 to promoted BA United at the Sunyani Coronation Park.

Striker Samuel Afful of Hasaacas bagged a brace in their 3-1 win over Liberty Professionals to win the award.

Aduana Stars preserved their record against Asante Kotoko with a 1-0 win at Dormaa Ahenkro and it was captain Emmanuel Akuoko , the centre-back, who caught the eyes of the technical team.

Another centre-back Joseph Aidoo of Inter Allies was head and shoulders above the rest when Eleven Is To One posted a 2-0 win over Medeama at the Tema Sports Stadium.

Stephen Nyarko was outstanding for Wa All Stars who beat Berekum Chelsea 1-0 at home.

Heart of Lions youngster Isaac Twum was the toast of fans as they won New Edubiase by two goals to nil.