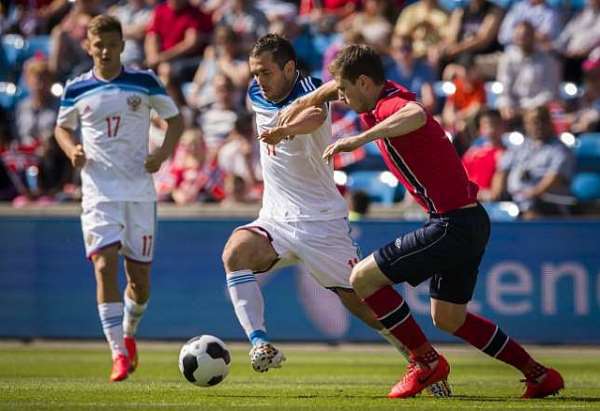 The 31-year-old needs just two goals in Brazil to surpass Vladimir Beschastnykh's record of 26 goals and should get an opportunity having played a role in all three of Russia's three pre-tournament friendlies.

But Kerzhakov maintained on Tuesday he is not thinking about joining the likes of Germany's Miroslav Klose and Australia's Tim Cahill as players in Brazil who have broken their nation's all-time scoring records this year.

"I'm only thinking about the World Cup and the possibility of participating for my national team.

"It is a very big honour for me to represent my national team in such a competition. This is the only thing I am excited about."

In Russia's three friendlies before the World Cup, Kerzhakov came off the bench against Slovakia to score the only goal of the game, played the first half in a 1-1 draw with Norway, and was subbed on in a 2-0 win over Morocco.

The Zenit St Petersburg man looks to be behind Dinamo Moscow's Aleksandr Kokorin in Fabio Capello's striking pecking order but with 25 international goals to his name, Kerzhakov is proven at the top level.

Kokorin has just five goals in 22 matches for Russia, while the other striker in Capello's squad - Maxim Kanunnikov - has not scored in his two international appearances.

Kerzhakov's goal against Slovakia was his second in a row - either for Zenit or Russia - that he scored off the bench and he claimed he is happy to play the role of super-sub in Brazil.

"In regards to the fact I am scoring goals coming from the bench, I am always accepting whatever time the coach gives me to play," Kerzhakov said.

"So, if the coach decides to play me from the bench then I will come onto the pitch and I will try to take my chance."

Russia will start their World Cup campaign against South Korea in Cuiaba on June 17, before facing fellow Group H opponents Belgium and Algeria on June 22 and 26 respectively.

"I truly believe that our group is a very strong one and that every team can spring a surprise," Kerzhakov said.

"We respect all of our opponents and we will try to qualify (for the knockout stages), but I believe it will be very hard and every team could have a chance to qualify."