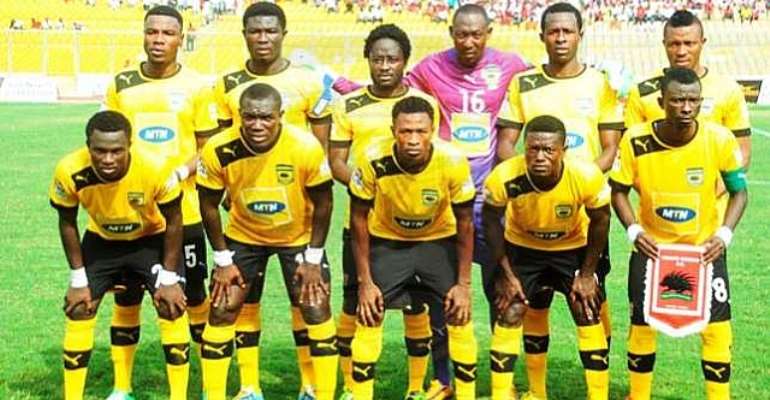 Fiifi Anaman at the Accra Sports Stadium
This was a final that went right to the last second.

It was also one that came to life right from the onset. Once the first kick was made, it was straight to business, the fireworks erupting in spectacular fashion.

Inter Allies had a golden opportunity to race into an early lead just seconds after kickoff, but winger Talla Ndiaye failed to beat Kotoko goalkeeper Joseph Addo in a one-on-one from 12 yards after being delightfully played through by partner Abdul Fatawu Safiu. Coach Herbert Addo paced about his technical area, visibly disappointed. He knew it was an opportunity too precious to waste.

That moment of explosiveness got the game going, and Inter Allies milked every bit of the psychological advantage, controlling the ball away from the shell-shocked Kotoko players.

But Kotoko - playing in their 12 FA Cup final and third in four years - would recover quickly, with winger Abdul Aziz Yusif racing into the box and hitting the side net against the run of play.

A few minutes later, the Porcupine Warriors hit the jackpot on their second attempt at goal, taking the lead. Richard Mpong capitalized on a case of defensive communication, latching unto Inter Allies right back Owusu Ansah's header back to his keeper by smashing the ball into the roof of the net with his weaker left foot.

One would have thought that this appetite-whetting start would set-up a pulsating rest of the half.

But that was it.
The fire with which the game commenced steadily quenched, as the initial excitement was sucked out of the game by both teams' strange loss of aggression. The urgency became lost, the enthusiasm too, as both teams seemed to have forgotten the occasion.

The worrying slump in standards - largely mirroring the boring, soulless nature of last year's - was only neutralized by the fans in the stadium, who sang and chanted vociferously to keep the atmosphere charged.

It took an equalizer from Inter Allies 13 minutes into the second half for the game to regain its consciousness. Ndiaye Talla made up for his early miss, slotting the ball in from 15 yards after being set up by Sheriff Mohammed.

The influence of the goal was telling, as the game opened up with both teams going fearlessly at each other. It was anybody's game at that point, and both sets of players knew that, letting themselves go in what became as exhilarating end to end affair.

There were countless attacks, countless counter attacks, and countless wayward shots too. The shots that were on target were feeble, and the attacks that were threatening were nullified by brilliant pieces of defending at both ends - notably from Kotoko's Abeiku Ainooson and Inter Allie's Joseph Aidoo.  The stakes were raised higher with each passing minute, with players becoming increasingly beastly, not ready to let slip.

It helped that both teams had their motivations: Kotoko bent on chasing down a chronically elusive double, and Inter Allies inspired by the prospects of a major upset - a 'cupset', they say - to wrap up what has been a fairytale season.

As the Accra Stadium floodlights were switched on, illuminating a warm evening, the intensity of play persisted, tension hitting dizzying heights. Kotoko came closest to snatching a winner, with Michael Akuffo curling a free kick from 25 yards straight unto the Inter Allies upright.

The palpable fear of penalty shoot-outs pumped up the urgency as the game headed for a thrilling final few minutes.

Then, with minutes to the full time whistle, it happened. Jordan Opoku, Kotoko's veteran diminutive midfielder, got on the end of a wide pass, controlled the ball and fired it across goal.

In what was a dramatic moment of irony, Seidu Bancey - perhaps Kotoko's most vilified player over the last two years - arrived in the box, getting on the end of the ball to deliver the double they so craved.