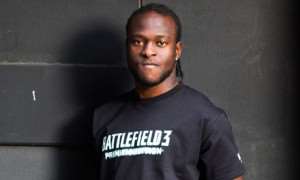 Victor Moses  born 12 December 1990, is a footballer who plays for Liverpool on loan from Chelsea. Moses can play in a variety of positions, but in the first-team games he has taken part in so far, Moses has mostly played as a winger. Born in Nigeria, he represented England at under-16, under-17, under-19 and under-21 levels, but opted to play for the Nigerian national team as opposed to being fully capped for England.

Moses was born in Lagos, Nigeria, the son of a Christian pastor. When he was 11, his parents were among thousands killed by rioters. A week later with his travel being paid for by relatives, Moses came to Britain as an asylum seeker.

He attended Stanley Technical High School (now known as the Harris Academy) in South Norwood. Scouted playing football in the local Tandridge League for Cosmos 90 FC, Crystal Palace approached him, with the club's Selhurst Park stadium just streets away from his school. Offered a place in the Eagles' academy, Palace recommended him to the fee-paying Whitgift School in Croydon, where former Arsenal and Chelsea star Colin Pates was coaching the school football team.

Club career
Crystal Palace
Moses first came to prominence at 14 after scoring 50 goals for Palace's under-14s side. Playing alongside side Joe Szekeres for three years at both Whitgift and Palace, the pairing scored over 100 goals between them, as well as helping Whitgift win many School Cups, including a National Cup where Moses scored all five goals in the final against Healing School of Grimsby at the Walkers Stadium, Leicester.

He made his debut in The Championship on 6 November 2007 away from home against Cardiff. In the Palace first team Moses settled down well, scoring 3 times in his first season and settling into the squad well. In the close season Moses committed his future to Palace, signing a four-year contract to take him through until 2012,[5] but the following season failed to ever really get going however, and despite a sustained period of starting matches he only managed to score twice.

Wigan Athletic
It was the 2009-10 season where he really came to prominence, when a run of five goals in eight games for the Eagles saw him become the hottest property of the January transfer window. On the final day of it he completed a £2.5 million transfer to Premier League side Wigan Athletic after Palace went into administration. He made his debut on 6 February 2010 as a substitute against Sunderland in a 1-1 draw.[7] On 20 March 2010, Moses came on as a substitute against Burnley and got his first assist for the club, setting up team mate Hugo Rodallega for an injury time winner.[8] He scored his first goal for Wigan on 3 May 2010 against Hull City.

Moses picked up two injuries at the start of the 2010-11 season, and found it difficult to make it back into the first-team due to increased competition for places. He scored his first league goal of the season on 13 November 2010 in a 1-0 win against West Bromwich Albion.

Following the departure of Charles N'Zogbia, Moses became a regular starter for Wigan in the 2011-12 season. On 10 December 2011, he scored his first goal of the season against West Bromwich Albion - his first goal since scoring against the same team last season.

Chelsea
On 23 August 2012, Wigan Athletic accepted a fifth bid from Chelsea after they finally met Wigan's asking price after four previously unsuccessful bids. The player was given permission to speak with Chelsea. On 24 August, Chelsea announced that the transfer of Moses had been completed. Moses played his first game for Chelsea when he appeared as a substitute against West London rivals Queens Park Rangers on 15 September.

Moses made his full debut for Chelsea when he started the League Cup game against Wolverhampton Wanderers and scored his first goal after 71 minutes in a game that finished 6-0 to the Blues. Moses started his first Champions League game against NordsjÃ¦lland. On 31 October, Moses was named Man of the Match of the match against Manchester United in the League Cup, a game Chelsea won 5-4.

On 3 November, Moses scored his first Premier League goal for Chelsea in the match against Swansea City, which ended in a 1-1 draw. Four days later, he scored his first Champions League goal for Chelsea against Shakhtar Donetsk; Moses replaced Oscar in the 93rd minute and headed in Juan Mata's corner with seconds left to secure a 3-2 win. On 5 January 2013, Moses opened his scoring tally for the year with a powerful drive into the bottom corner whilst playing in the FA Cup Third Round against Southampton, as Chelsea came from 1-0 behind to beat the Saints 5-1.

Moses scored his first Europa League goal for Chelsea in a 3-1 home win against Rubin Kazan, and then his second in the reverse fixture a week later. He continued his fine form in the competition by scoring his side's first goal in the 1-2 away win at FC Basel on 25 April. He also scored in the reverse match against Basel when the Blues won 3-1 at home and secured their participation in the Europa League Final, a match in which Moses did not feature but the Blues nonetheless won 2-1 against Benfica in Amsterdam on 15 May.

On 2 September 2013, Moses signed for Liverpool on a season-long loan deal. He scored on his debut on 16 September against Swansea City in a 2-2 draw.

International career
International career
England
U-16 and U-17 level
Despite originally hailing from Nigeria Moses initially chose to represent his adopted home of England, featuring for the under-16 team, in which he won the Victory Shield in 2005, and under-17 level. He travelled with the squad to the 2007 UEFA European U-17 Championship in Belgium, scoring three times (including the only goal in the semi-final win over France) to help John Peacock's side to the competition final, where they were narrowly beaten by a single goal by Spain, though Moses managed to finish as the competition's top scorer and collect the Golden Boot for doing so.

That same summer the squad travelled to South Korea for the FIFA U-17 World Cup. Moses finished as the Young Lions' top scorer, netting three times in the Group B fixtures, but sustained an injury in the victory over Brazil that ruled him out of the competition. Moses' teammates went on to reach the quarterfinal stage.

U-19s
Following that tournament Moses was promoted to the under-18 squad, and following his goalscoring exploits for Palace's first-team, he was promoted to the under-19 side without appearing sufficiently for the U-18s to actually collect a cap. He went with the U-19s to the 2008 UEFA European U-19 Championship in the Czech Republic, playing two matches and picking up one assist as the Young Lions failed to make it out of Group B. Speculation grew as Stuart Pearce snubbed him that Moses would return to play for Nigeria in the 2010 World Cup, this move never materialized.

U-21s
Moses was promoted to the under-21 squad at the beginning of the 2010-2011 Premier League season and made his debut against Uzbekistan in a 2-0 win.

Nigeria
Moses was selected to play for Nigeria against Guatemala in February 2011, but the friendly was cancelled. He accepted a call-up in March 2011 for Nigeria's games against Ethiopia and Kenya. However, he was ruled out of those games because his application to FIFA to switch nationalities was not received in time. It was announced on 1 November 2011, that FIFA had cleared Moses and Shola Ameobi to play for Nigeria. He was called up to Nigeria's 23-man squad for the 2013 Africa Cup of Nations, scoring two penalties in their final group stage game against Ethiopia, which Nigeria needed to win to go through. For the second, the Ethiopian Goalkeeper Sisay Bancha was given his second booking in the events leading to the penalty and was sent off. Ethiopia had already used all three substitutes so their holding midfielder went in goal, and missed Moses' penalty. The game ended 2-0.