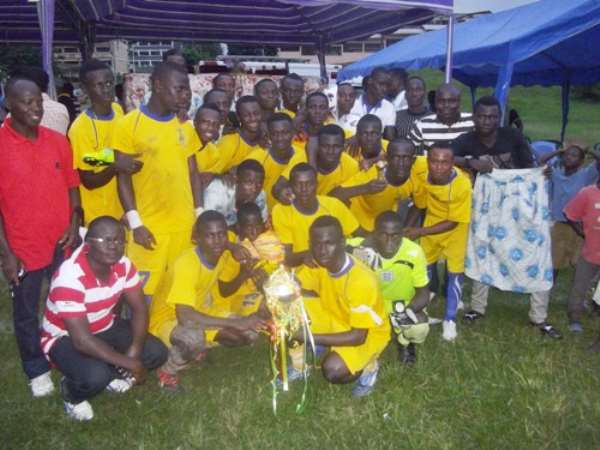 HASCO dominated proceedings in the first half of the game but turned the tide around in the second period where UBASH failed to equalize after the end of the game.

The win sparked wild celebrations for students, teachers and old students of HASCO for winning the 2013 edition of the Osagyefo Cup after failing to lift the trophy in the 2011 maiden edition to Nkroful Agricultural Senior High School NASS in a 2:1 penalty shootout after the game ended goal-less in regular time.

Perhaps the nature of the competition epitomised the hard struggle that Osagyefo had to endure before securing Ghana's Independence from her British colonial masters some 56 years ago.

Speaking at the closing ceremony, the Member of Parliament for Ellembelle, Hon Emmanuel Armah Kofi-Buah lauded Nzema Management, organizers and promoter for sustaining the Osagyefo Cup event which is aimed at honouring Dr. Kwame Nkrumah, adding the Osagyefo Cup Competition has rather become a household name for the inhabitants of Nzemaland and its environs.

He underscored the need for the youth of the area to take up their studies seriously and strives to venture into courses that would enable them to gain employment in the Oil and Gas industry. 'My Office will continue to support the educational sector through the various activities which would go the long way to promote quality excellence'

Hon Kofi-Buah who doubles as the Minister of Energy and Petroleum called all sundry to keep their surroundings clean and desist from littering indiscriminately to avoid battling diseases as a result of the filth generated.

The Acting Chief Executive of Nzema Events Management, sole organizers and promoters of the Osagyefo Cup Competition, Mr. Vincent Gyande Kangah thanked the sponsors for their efforts made to ensure that Dr. Kwame Nkrumah's birthday was celebrated in a grand style and called on other companies to put in place measures that would seek to sponsor future events.

He tasked the youth especially students to ensure discipline in their daily activities; this he maintained will enable them to achieve success in their academic ladder. He hinted of plans adopted by his company to initiate other relevant events that would encourage and promote the youth of the area through the various disciplines, thus education, trade, vocation, sports etc.

This, he mentioned some as 'Nzema Excellence Awards' targeted to deserving individuals, companies, institutions or groups who have contributed in lifting the image of Nzema at large.

The one-day knock out event was jointly sponsored by the Ministries of Energy and Petroleum and Tourism Culture and Creative Arts as well as partnered by the Office of the Member of Parliament for Ellembelle and supported by Adamus Mining Resources Limited and REF engineering and Construction Limited respectively.