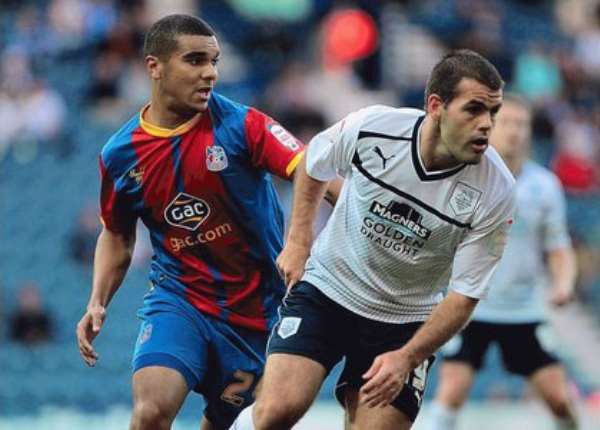 By Akyereko Frimpong Manson
Ghanaian youth forward Kwesi Appiah came off the bench to mark his senior debut for Crystal Palace as they got eliminated from the English League Cup after losing 2-1 Bristol City.

The 23-year-old replaced Aaron Wilbraham midway through the second half at the Ashton Gate Stadium as the Glaziers suffered defeat and elimination from the competition.

A memorable goal from Jay Emmanuel-Thomas inspired the host in the 59th minute before Scott Wagstaff put the tie to bed with an accurate finish from outside the penalty area.

Palace boss Ian Holloway gave Appiah his senior debut in the 2013/14 season and it is expected to inspire the youngster to crave for more playing time.

However, compatriot Hiram Boateng , the 17-year-old attacker, was an unused substitute.

Elsewhere at the Pirelli Stadium, Fulham needed a shootout win to progress through as they beat lower-tier side Burton 5-4 on penalties.

Midfielder Derek Boateng was unused and watched the entire action from the bench.

Sensational starlet Koby Arthur did not make the trip with Birmingham City who won 3-2 on penalties at Yeovil Town.

Former Liverpool starlet David Amoo scored the opener for Carlisle but they were beaten 5-2 by Leicester City at their own backyard.

Amoo scored with a neat finish for the hosts from a James Berrett's pass.

In France Dennis Appiah was not in action for Caen who lost 3-0 to Auxerre in the Coupe de la Ligue.