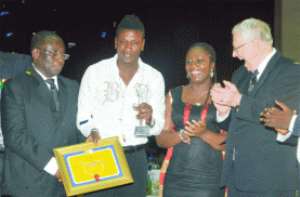 Moments after he had been called to the podium to receive a plaque, a certificate and products from MTN, the star-striker was at his entertaining best with hiplife artiste, Castro and the duo performed on the stage to the delight of the audience.

The Sunderland goal-getter also won the Footballer of the Year award in an event that was witnessed by a full-house which was entertained by the Ramblers Band.

The accompanying citation to the 25-year old Gyan's awards noted his sterling performance for the Black Stars in 2010 during the Nations Cup in Angola where he propelled the Stars to the finals and the South Africa 2010 World Cup where he once again showed his goal-scoring prowess to power Ghana to a historic World Cup quarter-finals.

The night did not only belong to the Sunderland ace scorer, as 32 other awards were received by deserving athletes, institutions,sportsmen and women and corporate entities.

Among them was former Star's skipper Stephen Appiah who won the Dedication and Valour award, the GFA President, Kwesi Nyantakyi, the Chairman of the Year and Team of the Year which went to the senior national team, the Black Stars.

George Osei was the best male golfer and Grace Afriyie took the female award. New Edubiase's Mumuni Abubakari was adjudged the Premiership Player of the Year, Joseph Mingle and Lawrence Nyanyo Nmai were adjuded Kickboxers for the year 2010.

The Deputy Minister of Youth and Sports, Nii Nortey Dua reiterated government's desire to develop sports as a tool for national unity.

He stated that this year's National Unity Games would be a new beginning for the development of sports.