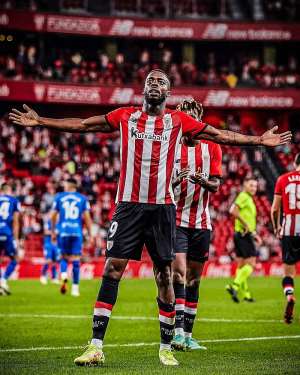 Ghana international Inaki Williams continued his fine form in the Spanish La Liga with a top performance for Athletic Bilbao on Friday evening.

The highly-rated attacker only returned from international duty with the Black Stars a few days ago after featuring in games against Brazil and Nicaragua as part of preparations for the 2022 FIFA World Cup.

Despite the extra load that comes with the national team assignment, Inaki Williams had more energy to start for Athletic Bilbao in the game against Almeria today.

In the game serving as the Matchday 7 contest of the 2022/23 Spanish La Liga season, the hardworking forward needed just 10 minutes to get on the scoresheet.

With an assist from his younger brother Nico Willaims, Inaki Williams found the back of the Almeria net to shoot the home team into a deserved lead to round off a good team move.

Seven minute later, the dominant home team doubled their lead through a strike from Oihan Sancet that ultimately put the side in control at halftime.

In the 62nd minute of the second half, Inaki Williams returned the favour and assisted his younger brother Nico Williams to also get his name on the scoresheet to give Athletic Bilbao a 3-0 lead.

Going on to last the entire duration of the match, the 28-year-old forward finished the game with a top rating of 8.3.

Eventually at the end of the contest this evening, Athletic Bilbao bagged the maximum three points on the back of a massive 4-0 victory.

With his goal today, Inaki Williams now has three goals and one assist after making seven appearances in the Spanish La Liga.