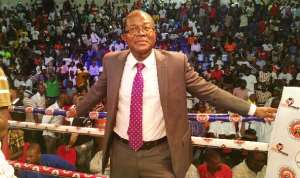 Immediate past President of the Ghana Boxing Authority (GBA) Lawyer Peter Zwennes has commended WBO International Featherweight Champion, Isaac Dogboe for setting a good example of paying his development levy towards the growth of the sport in the country.

“Thank you very much, Isaac. We are extremely grateful,” he said.

Peter Zwennes who has keenly been following activities on the boxing platforms and media also congratulated Niche Cocoa for supporting the Authority with Ghc100,000 as it will cushion and motivate the executives and officers to work harder.

During his tenure of office, Isaac Dogboe won the WBO Super Bantamweight Title.

He praised the administration of Mr. Abraham Neequaye and his efforts that has made boxing the leading sport to watch at the Bukom Boxing Arena every two weeks.

The former GBA President advised the current board to use the funds coming in judiciously and urged other companies to copy Niche Cocoa.