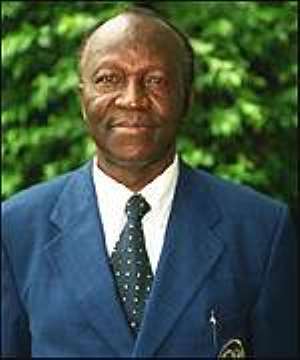 Accra, July 19, GNA - The government has just named the Winneba Sports College after Charles Kumi Gyamfi, (now known as Nana Kumi Gyamfi I) former captain and coach of the Black Stars in recognition of his contribution to the development of football in the country. Below is the profile of the soccer legend.

Born in Accra to the late Nana Kumi Bredo I, chief of Okorasi in the Akwapim Traditional Area and the late Diana Dodoowa Dodoo of Accra in 1929, Charles Kumi Gyamfi began playing football when he enrolled at the Junior School at Okorasi in 1936.

Though he was only seven, his special talent at the round leather game soon became noticeable and he became an integral part of the School XI and played regularly among boys who were much bigger and taller than him.

In 1944, young Gyamfi moved to Accra and due to his prowess at football, he was admitted to Accra Royal School at the time when admission had closed and there was indeed no vacancy.

"I told coach Ataa Nii Katoe that I could play better than most of his players and when he gave me the opportunity I played very well and he took me to the Headmaster for admission," Nana recalled with nostalgia.

In one of such matches, C K as he was popularly referred to in football circles was spotted by officials of Noble Arrics, the junior team Great Argonauts and was coaxed to play his first club football for the Accra team.

He recalled that it was at Kotoko that he played alongside national team players and actually earned his first cap in 1950. In 1951, CK travelled with the Gold Coast XI team that toured England and Ireland. On the tour, the barefooted, Gold Coast team scored a total of 25 goals and C K accounted for 11 of them.

After playing for the national team against the visiting Fortuna Dusseldorf team from Germany, the German team offered C K the opportunity to play professional football in Germany. In his debut, he scored a goal for the German team and the fans soon nicknamed him "Tunda Vita" which means Thunder Weather due to his shooting power.

Though Ghana won the Nations Cup in 1963, pundits believed C K won with the team that had been prepared by Ember and some people actually called for his removal as national coach. He however had the support of the late Mr Ohene Djan who was the Director of Sports and had overall responsibility for hiring and firing coaches.

As the African championship team was aging, C K had to replenish the squad and he got on board a new breed, which included Osei Kofi, Frank Odoi and Willie Evans and worked hard on the new team in readiness for the defence of the African title in Tunisia in 1965. CK's Black Stars successfully defended the title as they defeated their Tunisian hosts in the finals by three goals to two. He remained in oblivion after the military take over of government in 1966 and surfaced only in 1972 when he was appointed by CAF to manage the African XI in a tournament in Brazil which involved Japan, Argentina, France and Italy.

At the end of the tournament he joined GIHOC and developed a soccer team, which became a fearful side in the country.

In 1981 he went to Brazil for a refresher course and returned to take the Black Star to the Cup of African Nations (CAN) in Libya in 1982. He won his hat trick of African titles at this tournament and remains to date, the only coach to have won the title three times. After his triumph in Libya, C K sojourned to Somalia to take up appointment with the Municipal Club and guided them to their first league title in 1983 and repeated the dose the following year. Impressed by his performance, the Somali Federation put him in charge of their Youth Team for the African Under 21 competition. Though the team lost narrowly, 0-1 to Nigeria in Lagos after eliminating Kenya, C K was commended for developing the team.

Unfortunately, those who were in charge of appointing the national coach preferred Burkhard Ziesse to the treble African champion who was resigned to paper work in the office as Technical Director without any powers to influence how the team was being groomed. CK then pitched tent with Obuasi Goldfields and supervised the team to win the first professional league in Ghana in 1993. He retired from active coaching after the league triumph and was appointed a CAF Technical Instructor in 1994. He also served on the FIFA Technical Committee from 1998 to 2002.