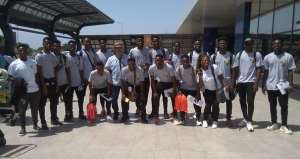 A contingent of 16 Players and 4 officials of MSK Zilina Africa FC left Accra, Ghana on Sunday for Dubai in the United Arab Emirates (UAE) to engage in trial matches and a tournament.

The Tseaddo based division two team will face top clubs like Al Nasr, Al Jazeera, Al Ain, and others in the tournament dedicated to the Muslim Fast.

CEO of the club Mr. Ishmael Lamptey who spoke to the media before departure said, they want to make Zilina Africa, formerly called Soccer Engineers one of the best and most popular football clubs in Ghana and Africa, so they are going to give all their best to attract scouts and bigger clubs.

He said the team has a mix of African players as there are Ivorians, Cameroonians, and Ghanaians.

He expressed that they also want to prove that Tseaddo has talent in sports, especially football, so they will keep on giving chances and opportunities to be youth.

"We the football people are those doing the work of God because we create such opportunities for players and it can turn their lives around if they are serious and committed" he stressed.

"Such international tours and trials build the confidence of players and make them tactically and technically better " he added.

Quizzed on the FIFA World Cup draw, he was optimistic that Ghana will qualify from the group. He hailed Coach Otto Addo for transforming the Black Stars.

Phil Johnny Quartey, a sports journalist, and resident of Tseaddo said the club is opening opportunities for young people to showcase their talent.

Tseaddo is one of the areas in the capital, Accra developing fast with new residential facilities.