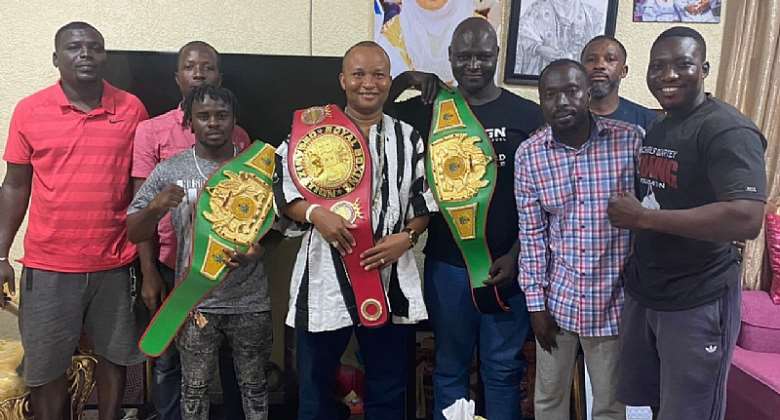 The two won their national title belts at the Idrowhyt Events Center in Accra.

The two champions presented their title belts to the Sempe Muslim Akwashongtse, Nii Adotey Odaawulu I to show appreciation for his support during their preparation towards the fight for the titles.

Osumanu Haruna on December 26, 2021 at the Odrowhyt Events Center made the people of Zongo and his fans proud after stopping Nii Ofei Dodoo to win the National heavyweight title.

Osumanu Haruna also known as Alhaji Saabo is a drummer and a singer who is very popular within the Zongo communities due to his imposing stature and sterling performance at social gatherings.

He has been in the boxing trade for more than a decade and has represented Ghana at International events such as the Olympics.

The newly crowned Ghana Heavyweight Champion has a fight record of 15 fights, 13 wins 8 by way of KOs and 2 losses.

The Sempe Muslim Akwashongtse, Nii Adotey Odaawulu I called on the two boxers not to allow their victory cause them to sleep but rather focus on their training and dream big to become world champions.

He said the time has come for the youth in various sporting disciplines work hard and bring out the hidden talents in them.

He advises both boxers, their managers and the coaches to always live in peace and harmony as well as respect each other's views.

This according to him will earn them more titles for the team as they embark on tour outside Ghana.

The Sempe Muslim Akwashongtse presented an undisclosed amount of money, watches and perfumes to the visitors.