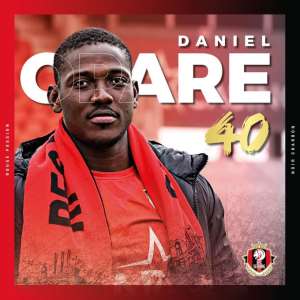 The club in the first round of the 2021/22 Belgian top-flight league season struggled and are now set to battle relegation in the second round.

Keen on fighting to survive at the end of the season, the club has taken advantage of the mid-season break to bring in new players.

After successful talks with Daniel Opare and his representatives, RFC Seraing have today announced the signing of the full-back to enforce the defense of the team.

“Our club is happy to announce the signing of Daniel OPARE.

“Free of contract, Daniel had trained with our group during the month of December, to the general satisfaction,” RFC Seraing said in a statement on Wednesday afternoon.

The experienced right-back has been handed the Number 40 jersey at RFC Seraing and will have a vital role to play for the team in the second round of the 2021/22 Belgian Jupiler Pro League season.

Prepare for hunger in Ghana — GAWU warn Ghanaians
44 minutes ago