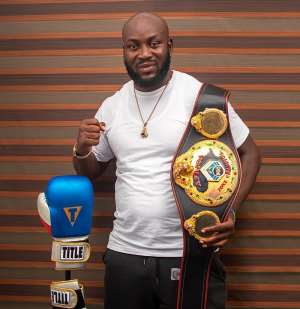 The Ghana Boxing Authority (GBA) has imposed further sanctions on Heavyweight boxer Harrison Nii Lartey, for engaging in acts they described as “shameful and embarrassing” to Ghana boxing.

A statement from the GBA said, Nii Lartey recently fought Abdulkerim Edilov in Russia and was knocked out in round one.

According to the GBA, investigations into the fight revealed that Nii Lartey did not fight as a Ghanaian but a Tanzanian licensed boxer.

Nii Lartey, who is already serving a five-year ban under GBA before going into the fight had been banned from all GBA organized functions and activities for the remaining years in the five-year ban.

In addition, he had been banned from visiting any gym or facilities under the jurisdiction of GBA.

“We hope the boxer would abstain from all forms of misconduct and be of good behaviour,” it added.

The GBA last year imposed a five-year ban on Nii Lartey for forgery of documents and engaging in fights outside the country without their authorization.

2022 budget tango: Be mindful of the image you're creating t...
9 minutes ago